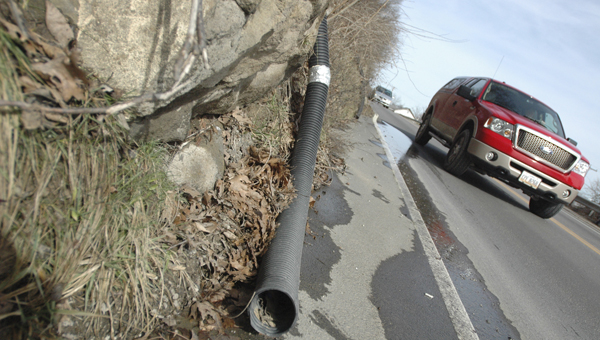 Part of the hillside is sliding down onto Rockwood Avenue in Chesapeake, prompting concerns that it could shut down the roadway. The Tribune/Jessica St. James

CHESAPEAKE — Ohio Department of Transportation officials continue to assess a slip that could potentially threaten to shut down part of Rockwood Avenue in the village.

After that comes the question of who is going to fix it.

It was in May that village leaders noticed the hillside starting to slide onto the roadway, also known as State Route 7, which runs parallel to the Ohio River.

“In June it started to heave up the roadway and it has been working its way ever since,” Mayor Dick Gilpin said.

Late last week an ODOT geotechnical engineer and crew from the traffic department began assessing the situation and possible solutions.

“They had not made a final determination of what they might do,” Kathleen Fuller, ODOT District 9 public information officer, said. “We have to look at it from a lot of different things, what level of emergency is it, how soon does it have to be done. …You can repair the slip, but how much more do you have to do. What needs to be corrected?”

However, since the route is inside the Chesapeake limits, maintaining the road is the village’s responsibility, Fuller said.

“As it is defined by law, they have a maintenance responsibility,” she said. “Whenever anybody calls us, we will look at (the situation) and work with the local community, if we can address the project. It is a different process if it is outside the village limits.

“We have not determined who is doing what. We don’t know if we will be doing anything at this point. If there is no funding for the village, they can come back to ODOT to determine how best to determine the project. It is a different process than if we had complete right of way.”

This past weekend Gilpin said the hillside had moved another two to three inches nearer the roadway, now reaching the white shoulder line of State Route 7.

Gilpin’s concern is that the slip could force the closure of the road.

“That the road will be covered to the point we have to put (traffic) lights up and make it a one-lane road,” he said. “Or shut it down totally. I would hate to have that happen, not only for traffic, but for emergency vehicles. That is a major east-west corridor of the county.”

ODOT repaired a comparable slip five years ago where the hillside was tapered back with a retaining wall installed, the mayor said. “To get the money to do that and get it on the schedule, it will take a couple of years,” he said.

Gilpin spoke to ODOT officials last week about the slip.

“They are painfully aware of what is going on,” he said. “I can’t fault them. They might have something in the works and I am not aware of it.”

A cooperative effort between ODOT and the village Gilpin sees as a possible solution.

“We will assist, but our resources are limited,” he said. “We don’t have the equipment to get in there.”

If ODOT were to deemed the slip an emergency, it can administer the contract for the village, Fuller said.

“We do that for local communities,” she said. “It does work a little bit differently. We can’t go in and start doing the project. We have to be in touch with the local government. It is a state route, a primary artery. We want to work with our local community. No decision has been made as what would be done and when.”