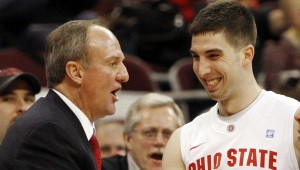 CLEVELAND — Leaning back in a chair inside Ohio State’s locker room, Jared Sullinger seemed amused by all the fuss. As he and his teammates got ready for practice, Sullinger was asked if he was nervous before his first NCAA tournament game.

“No, not really,” the fab freshman said. “It’s just another basketball game. We just want to keep playing basketball.”

Composed, confident and close enough to their campus to make them feel at home, the top-seeded Buckeyes will take the next step toward what they hope is their school’s first NCAA title in 51 years on Friday night when they face 16th-seeded Texas-San Antonio.

Expectations have never been higher for Ohio State (32-2), which has spent most of this season at — or near — the top of the polls. In a season where parity has ruled like never before, and in maddening March of upsets and near upsets, the Buckeyes have been tabbed as the team to beat.

They wouldn’t have it any other way. Some teams buckle under pressure. Others thrive in it. Now is not the time to be afraid.

“We don’t have any worries,” senior guard Joe Diebler said, exuding a champion’s conviction. “We’re very talented and we feel that if we come to play and come with the intensity that we have, then we should be OK. It’s not an easy run, but at the same time, we’ve been doing it all year.

On the short walk from the locker room to the Quicken Loans court, the Buckeyes had a pre-practice swagger that screamed “We got this.” Led by freshman guard Aaron Craft, the Big Ten’s regular and postseason champions, bounced down the hallway like kids going from class to recess.

Diebler mentioned aloud that former Cavaliers guard Mark Price was his favorite player, drawing a few cracks from his teammates. The Buckeyes waited in a cluster behind a large curtain before being introduced to a crowd filled with Ohio State fans — and a few stragglers from the St. Patrick’s Day parade — and were immediately serenaded with chants of “Let’s Go Bucks.”

This is a homecoming for a few of the Buckeyes, including fifth-year senior guard David Lighty, the Buckeyes’ most versatile player who has overcome numerous injuries during his college career. For Lighty and senior center Dallas Lauderdale, a chance to begin a possible championship run in their backyard is special.

“It’s our last go-around,” said Lighty, one of four seniors scheduled to graduate. “And coming back to where we all started, playing the game of basketball, in front of our family and friends and now to pretty much end our career with them being able to see us is something you really can’t describe. It’s just a warm feeling.”

The Roadrunners (20-13) have been on their own Ohio vacation.

After winning the Southland Conference tournament, UTSA began its NCAA journey in Dayton, where the Roadrunners beat Alabama State 70-61 in the inaugural “First Four” round on Wednesday. Sophomore guard Melvin Johnson III scored 29 points — 25 in the first half — to lead UTSA to the first tournament win in school history.

Not long after the game, the Roadrunners boarded a bus for a dark, 3 1/2-hour drive to Cleveland.

Johnson, who wrote “SWISH” on the sides of his orange sneakers, had the game of his life.

“The ball was just going in,” he said. “I don’t know what was going on. The stars must have been aligned.”

Half of the Milky Way may have to line up for the Roadrunners to take down the Buckeyes. Since the tournament expanded to 64 teams in 1985, No. 1 seeds are 105-0 against No. 16 seeds. There have been a few narrow escapes, most notably in 1996 when Purdue survived a scare with a 73-71 win over Western Carolina, which missed two shots in the final seconds.

Ohio State coach Thad Matta remembers it well. He was an assistant for Western Carolina.

“I know what those guys are definitely thinking over there,” he said.

For the Roadrunners to drop Goliath, they’ll need to contain Sullinger, who has spent his first year in college embarrassing far more seasoned players on the low block. Even if UTSA does that, the Buckeyes can beat them from long range.

And then there’s the issue of scoring against an Ohio State team that doesn’t give up easy buckets.

UTSA coach Brooks Thompson believes he has a plan for Sullinger and the big, bad Buckeyes.