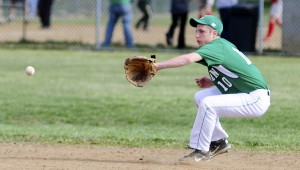 Green Bobcats’ shortstop Tyler Hughes gets in position to field a ground ball during Wednesday’s SOC game against Symmes Valley. Hughes homered to help spark the Bobcats to an 11-1 win. (The Ironton Tribune / Kent Sanborn of Southern Ohio Sports Photos)

“We played pretty well. That was a big league win for us,” said Green coach Dan McDavid. “We’re happy with where we’re at right now, but we still have a lot of room for improvement.”

Green is now 5-0 on the season and 2-0 in the Southern Ohio Conference.

T.J. McCloud pitched a five-hitter as he struck out five and walked three to get the win.

Rob Applegate was 2-2, Matt Ratcliff 2-3 and Tyler Hughes and Colton Brammer each went 2-4 as Green pounded out 12 hits.

Hughes jumped started the Bobcats’ offense as he led off the bottom of the first inning with a home run. They added a run later in the inning on hits by Applegate and Ratcliff and an error.

Green blew the game open with six runs in the fourth inning.

Hughes singled and stole second base with one out. Matt Ratcliff singled home Hughes and Stephen Ratcliff reached on an error.

The Vikings (1-4, 1-2) got their only run in the top of the fifth on a double by Cody Myers, a walked to Nathan Dockery and a throwing error.

But the Bobcats scored three times in the bottom of the inning to end the game.

Applegate was hit by a pitch, McCloud singled, Matt Ratcliff walked and Stephen Ratcliff had a two-run single. Brammer then had a walk-off single to drive in the clinching run.

“We played well against a good ball club,” said McDavid. “Symmes Valley is well-coached. It’s always a tough game when we go up against them.”