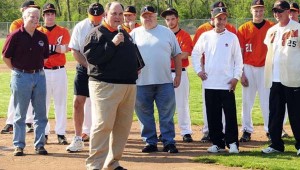 “I am very honored and humbled,” Burcham said during pregame ceremonies. “Most things like this happen because you’re old or dead.

“Ironton is a special place because the people get along. They cheer for each other.”

Ironton athletic director Mark LaFon presented Burcham with a plaque and former players surrounded him during the ceremonies making their own presentation.

Ironton head football coach Bob Lutz spoke about Burcham who has been an assistant coach with Lutz during his career with the Fighting Tigers.

“This is long overdue,” said Lutz. “He’s a great baseball coach and as knowledgeable as there can be. He’s my right-hand man in football. We’re as close as you could be.

“He calls everything like it is, but he has a heart of gold from his work with the Special Olympics to guys who need tutoring. They asked Doc Holliday about Wyatt Earp, ‘Why do you do these things? Holliday said because he is my friend.’ Mike Burcham is my friend.”

Burcham was an outstanding catcher and hitter for Ironton and the University of Rio Grande where he was inducted into the school’s athletic Hall of Fame in 1976. He is still the career home run leader.

He returned to his alma mater where he became the head coach in 1967. During his 18 seasons, Burcham posted a 323-129 record with seven league titles, 10 sectional titles, four district crowns, one regional and the school’s only state championship in 1972.

Former players from the state title team such as Jim Tordiff, Rick Massie, Jimmy Payne, Scott Wylie and Fred Easterling were on hand as well as other players coached by Burcham like Juan Thomas, Mark Dickess and Howie Dickess.

The members of the 1972 team made their presentation and Tordiff said, “Without you, we wouldn’t have done it.”

Burcham thanks his players and paid tribute to others who have died such as Jeff “Sticks” Collins, Shawn Miller and Keith Parker. Collins and Parker were pivotal players on the state championship team.

Burcham also thanked former superintendent Harold Conley and principal Jim “Bear” Mains who supported him during his early years as well as assistant coach Lou Parker and scorekeepr Beryl Jenkins. All are deceased.