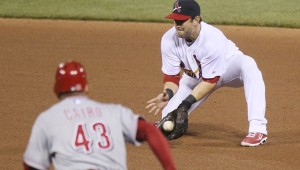 ST. LOUIS (AP) — Edinson Volquez took the blame for the pitch that ruined his start.

The Cincinnati Reds right-hander said he shook off catcher Ryan Hanigan on the first-pitch fastball that Yadier Molina hit for a three-run homer in the sixth inning of a 3-0 loss to the St. Louis Cardinals on Sunday night. Though it was his 100th pitch, Volquez said fatigue was not a factor.

Jake Westbrook threw six innings of three-hit ball in his first career start on three days’ rest for the Cardinals. The outing was the longest of the season for Westbrook (2-2), who entered with a 9.82 ERA and was strafed for seven runs in three innings Wednesday against the Nationals. The early hook after 68 pitches perhaps allowed Westbrook to rebound and help the Cardinals take two of three, break a tie with Cincinnati for first place in the NL Central and go to 11-0-1 in home series against the Reds since 2006.

The Cardinals had two men on with two out, both on pop-ups, before Molina’s homer.

“That pitch was supposed to be inside, but it got a little too much of the plate and Molina is a smart hitter,” manager Dusty Baker said. “Most of the time, in that situation he’s going to shoot you into right field, but that time it looked like he was looking for it in there.”

Baker said Volquez would have been done for the night after the sixth.

“What are you going to do, are you going to take him out right there?” Baker said. “The way he had manipulated his way through the inning, do you give him a chance to get out of that or do you bring somebody else in to take a chance of losing this game?

“That was his game and his pitch count wasn’t that high and he was throwing the ball great, he just barely missed on that location.”

Albert Pujols was removed for precautionary reasons after seven innings with mild tightness in right hamstring.

Brandon Phillips had a pair of doubles for the Reds, who were shut out for the first time and have lost nine of 11.

Volquez (2-1), who warmed up but did not pitch in a rain-delayed game Friday, had all seven of his strikeouts in the first four innings and limited the Cardinals to four hits in the first five before fading. Matt Holliday doubled with one out, followed by an intentional walk to Lance Berkman, and Daniel Descalso fouled out before Molina jumped on a first-pitch fastball for his first homer.

Volquez has allowed seven home runs, one off the league lead.

Phillips doubled with one out in the fourth for the first hit off Westbrook and doubled again in the sixth, both times ignoring boos from fans who can’t forget his role in a brawl last August in Cincinnati. Umpires presumably can’t forget either, with plate umpire John Hirshbeck warning both benches after Aroldis Chapman threw well inside against Molina in the eighth inning.

Westbrook struck out four and walked three while throwing 87 pitches. He’s 8-18 with a 5.00 ERA for his career in April, by far his worst month, even after mastering the Reds. His previous outing, on six days’ rest due to a rainout, was his shortest in nearly four seasons.

Mitchell Boggs worked the ninth for his third save in as many chances since replacing Ryan Franklin at the beginning of a 4-2 homestand and relievers combined for six strikeouts in three innings. The Cardinals have won 10 of 14 overall.

Notes: Tony La Russa is much improved from a virus leaving the right side of his face swollen and eye nearly closed earlier in the homestand. … Molina threw out a runner attempting to steal and homered in the same game for the fifth time in his career, according to STATS LLC. … Reds RHP Homer Bailey (shoulder) worked 5 1-3 scoreless innings in a rehab start for Triple-A Indianapolis, allowing three hits with six strikeouts and a walk, and the team will decide Monday whether he will need another start. … Joey Votto has reached base safely in all 22 games. … Chapman has not allowed an earned run in 10 appearances covering 9 2-3 innings.