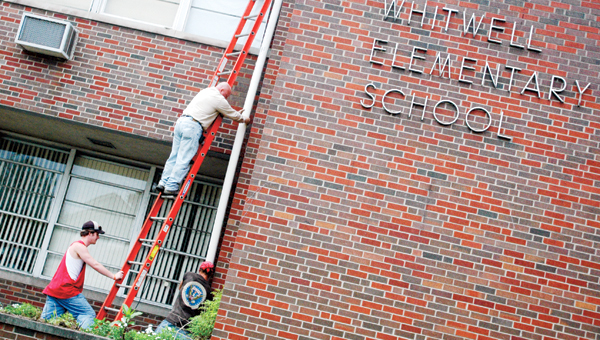 Jack Hager, with Jack Hager DBA Southern Ohio Salvage and Contracting, makes his way up a ladder to help replace stolen pipes and gutters at the former Whitwell Elementary School. Thieves broke in and stole copper piping, 20 sinks, doors off refrigerators and much more. THE TRIBUNE/JESSICA ST JAMES

The Ironton Police Department is looking for the person or persons who broke into and stole copper piping and other metal material from the former Whitwell Elementary School.

Twenty stainless steel sinks, flush valves from toilets and urinals, plumbing from the bathrooms, a metal freezer door and six downspouts and gutters were also taken. The thieves also took shelving from the classrooms and one metal food server and most of another.

Owner Jack Hager said he noticed the building had been burglarized when he went to cut the grass there Monday.

The thieves pushed their way through an air conditioning vent at the front of the school and left through doors leading into an alley from the old school’s gymnasium, Hager said.

He said the theft occurred sometime with in the past 30 days.

“They cut into a main line into the bathroom and water ran into the bathroom for who knows how long, maybe three weeks,” Hager said. “Someone took the lid to the meter and was trying to find a way to turn the water off so they could stop the water.”

The running water caused the ceiling in the bathroom to fall.

Hager estimates that $50,000 worth of damage was done.

“We’ve made a report with the police department and luckily I got insurance,” he said. “I had a girl the other day walking down the sidewalk who said they got in her house and she didn’t have insurance, (Someone) took the electrical wire out of it.”

A recent rise in the price of copper has caused an increase in copper thefts, Chief Jim Carey of Ironton Police Department said. Besides the old school, St. Joseph High School and a church have also recently been sites of copper thefts, Carey said.

“The amazing part is that nobody has seen these things,” Carey said, adding that the Whitwell theft probably required a truck to haul the material away. It is possible that someone could have mistaken the thieves for construction workers, Carey said.

Hager is offering a $1,000 reward for information leading to the person or people responsible for the theft.