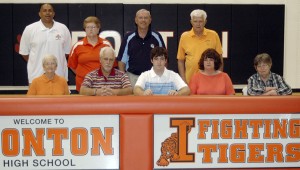 History is on Andy Holtzapfel’s side.

Along with a pretty good golf swing.

Holtzapfel became another in a group of Ironton Fighting Tigers’ golfers to sign a letter-of-intent to play for the Shawnee State Golden Bears.

The senior joins other notable Ironton golfers such as Doug Joseph, Tony Brown, Jeff Kerns and Brian Washburn to play for Shawnee State.

“We’ve had nobody come to our school from Ironton that didn’t play,” said Shawnee State head coach Roger Merb. “Doug Joseph may have been the best we had and Tony Brown was an All-American.

“They play on a good high school program and bring a good work ethic. We lose our top three and Andy is as good as any of the three we have back. It wouldn’t surprise me if he made our top five. It doesn’t happen often. He’s coming in at the right time.”

Holtzapfel may be coming at the right time, but he’s coming with plenty of credentials.

“I wanted to play close to home and play in a competitive program,” Holtzapfel said of his choice to play for the Bears.

“I think we’ll be pretty good. We don’t lose that many golfers and we have some good ones coming in.”

Shawnee State plays its home matches at the Portsmouth Elks course and Holtzapfel said that is one of his favorites. However, he knows there are plenty of other courses to play throughout the Mid-South Conference.

“The biggest difference will be traveling and playing courses I haven’t played. And there will be more practice time involved,” said Holtzapfel.

Andy is the son of Larry and Kim Holtzapfel of Ironton.