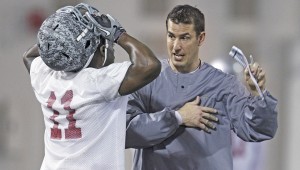 “I think I do,” he said Thursday as his team winds up preseason workouts and now begins preparing for its opener on Sept. 3 against Akron.

He does know that being in charge adds to the pressure.

“I guess you have a broader spectrum of worries, so to speak, but that’s just me by nature,” he said. “I’m a guy that’s always looking maybe to see how can we get better and not really ever satisfied with what we have.”

Fickell was elevated earlier this summer from the defensive assistant’s job he had held for nine years. He took the place of Jim Tressel who resigned in the wake of a NCAA scandal over players getting cash and free tattoos for signed memorabilia.

It’s been a relatively crisis-free month of practices for Fickell. Sure, there are a world of questions about the transition atop the program, what was unearthed during the monthslong investigation and how much the NCAA will penalize Ohio State for the violations by Tressel and several players.

Even though those dark clouds have hovered over the program throughout the dog days of summer, Fickell chooses to look at them as something that has bonded his players.

“With adversity and with different things that happened, it brings you tighter together,” he said. “That’s the one thing you could truly say: The effort level, the energy level, is something that we’ve been excited about.”

The Buckeyes have begun to accept him as something more than a stopgap coach.

“Having coach Fickell under (Tressel) for so many years there are similarities but some differences,” punter Ben Buchanan said. “Coach Fickell is a very intense coach and a coach we’re really excited to play for. I know he fires me up every day to go to practice.”

There have been few dramatic changes in the daily routine, but that doesn’t mean everything is exactly the same as it was during Tressel’s 10 years in Columbus.

“Coach Tressel laid the foundation and coach Fickell picked up with that,” linebacker Storm Klein said. “He wants to establish himself as the head coach this year. We’re doing things a little bit different, the meetings are shorter. He’s doing some things to make it his own camp and the players really like that.”

Fickell is faced with having to replace half of the Buckeyes starters from last year’s team, including replacing three-year starting quarterback Terrelle Pryor. Fickell confirmed on Thursday that what was a four-man battle for the job has now been reduced to 25-year-old, fifth-year senior Joe Bauserman and true freshman Braxton Miller.

Fickell, 38, said he’d have no problems going with two quarterbacks.

“If you think that’s what’s best for the team, then that’s what you go with,” the former Ohio State nose tackle said. “You could go back to ‘96, when I was here, our senior year, we had a two-quarterback system and it worked. Whatever fits the team. You’ve got to give guys opportunity to see what they’ll do in front of 106,000 and how they accept that responsibility. That might be what we’re after.”

Even though the competition has been narrowed to two candidates, that doesn’t mean Fickell is ready to declare a frontrunner.

“I don’t know that we’re ready to truly to say, ‘Hey, this is yours,”’ he said. “We want them both to compete and we want both of those guys to understand that we need them.

“Whatever way that is, we’re going to need them.”