Hornets power past Pointers in OVC 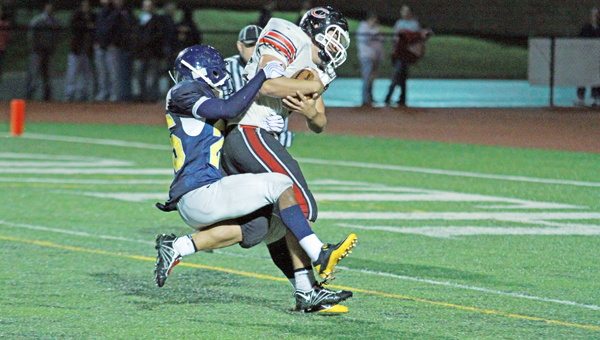 Coal Grove running back Greg Bender drags a South Point defender into the end zone as he scores a touchdown in the Hornets 40-6 Ohio Valley Conference win on Friday. (The Ironton Tribune / COURTESY JOE STEVENS of FJSPhotos.Com)

SOUTH POINT — After losing in heartbreaking fashion last week to Bishop-Ready, the Coal Grove Hornets shook off that feeling en route to a convincing 48-6 win over the South Point Pointers.

“Our kids did a good job of executing, and several of the kids had really nice ballgames tonight. I could go down the list of the kids who played well tonight,” Coal Grove coach Dave Lucas said.

Coal Grove (2-3, 1-0) looked to set the tone early, and took the opening possession 69 yards in 15 plays that took nearly seven minutes off the first quarter clock and saw the Hornets convert on two fourth downs.

The drive was capped off by an Isaiah Gunther one-yard run, but the two-point attempt was no good. The score with 5:12 to go in the first was 7-0.

After a South Point punt, the Hornets moved 47 yards in six plays, and was capped off by a Greg Bender 20-yard run. The two-point attempt was no good and the score with 30 seconds to go in the first was 12-0.

“That is our trademark (long sustaining drives), and the kids know that is what we want to do. However, we have the ability to move quickly and it helps those plays on the longer drives,” Lucas said.

On the ensuing kickoff, the Pointers’ return man was stripped and Coal Grove’s Trevor Barrett scooped up the fumble and returned it 17 yards for the score to make it 18-0.

After another South Point punt, the Hornets again went on a long drive that again lasted 15 plays and covered 45 yards but ended when the Pointers’ Gage Townson intercepted quarterback Alex Bare.

The Hornets’ defense again forced a Pointers’ punt. Coal Grove moved quickly, when on the fourth play, Bare found Gunther who weaved his way through the South Point defense for a 23-yard score. Jordan Beals converted the two-point try to make the score 26-0 at the half.

The Hornets ran 41 offensive plays to South Point’s 12 in the first half.

“I can’t say enough about how well our defense played tonight,” Lucas said. “When your defense plays that well and you get the ball that many times, it really helps out the offense.”

Coal Grove added to the lead after a South Point punt to open the second half when Greg Bender scored from 60 yards out. T.J. Barrett added the extra point and the score was 33-0.

Coal Grove would add two more touchdowns, the first on a 48-yard pass from Bare to Bryan Steele and the second on a one-yard touchdown run from Cody Pennington.

“This gives the kids momentum going into next week’s practice to come out and work hard,” Lucas said.