Bengals’ Jones says desire to play has nothing to… 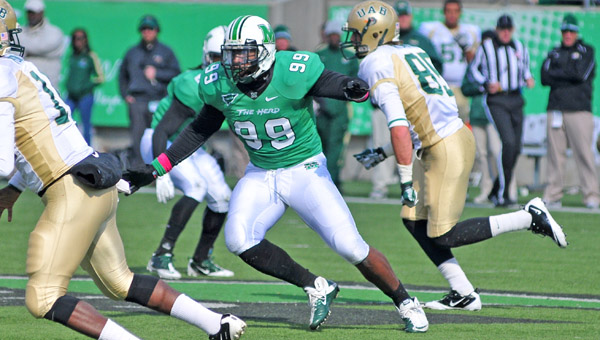 Marshall Thundering Herd senior defensive end Vinny Curry (99) has been selected to play in the Senior Bowl on Jan. 28 in Mobile, Ala. (The Ironton Tribune / Kent Sanborn of Southern Ohio Sports Photos)

HUNTINGTON, W.Va. — Marshall defensive end Vinny Curry has been invited to participate in the 2012 Senior Bowl at Ladd-Peebles Stadium in Mobile, Ala.

His 45.0 career tackles for loss is also tops among all active FBS student-athletes and eighth all-time at Marshall. His 26 sacks rank him fourth in the school’s career record book as well.

He was named Bronko Nagurski National Defensive Player of the Week following his 4.0 TFL, 3.5 sack performance in the 24-20 Homecoming win over Rice on Oct. 15. That award came on the heels of National Defensive Lineman of the Week honor by the College Football Performance Awards after his 4.5 tackle for loss, three sack day in the 26-20 win over Southern Miss on Sept. 10.

The senior captain from Neptune, N.J. also has 53 tackles on the season, one fumble recovery, and two blocked extra points.

Coaching staffs for the game each year are selected by the NFL office.

In addition to the coaches, each NFL team chosen by the league to coach the Senior Bowl teams also brings its training, video and equipment staffs to the contest to work with the Senior Bowl players and maximize the many benefits that the players will receive by playing in the contest.