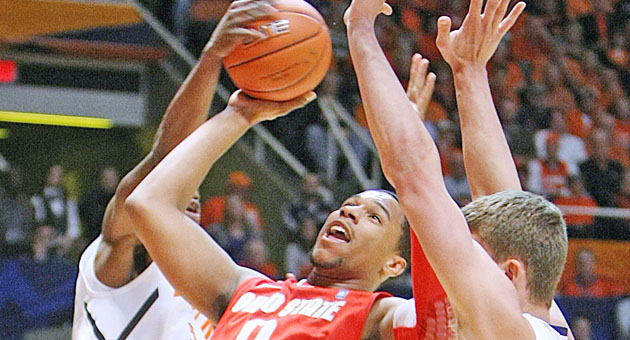 CHAMPAIGN, Ill. — Brandon Paul awoke from a nap Tuesday to a text from Illinois coach Bruce Weber. The message was simple: It’s your night.

Weber couldn’t have known how right he was.

The most important of Paul’s shots was an off-balance 3-pointer that, with 43 seconds left, gave Illinois a 74-70 lead that all but finished the Buckeyes.

By then, the junior said, so many of his shots had fallen he couldn’t help but laugh to himself.

“I was laughing a couple times. After the first couple three’s, I just said I was going to keep shooting,” Paul said, saying he didn’t think he’d ever scored 43, even in AAU ball. “That’s the mindset that I’ve got to have.”

Buckeye coach Thad Matta said Paul’s night — and the Illinois win it guaranteed — was among the best he’s seen anyone have against Ohio State (15-3, 3-2).

Paul scored the final 15 points for the Illini.

But with the game tied at 66 with just over two minutes to play, Joseph Bertrand swiped the ball from William Buford, putting the ball in Paul’s hands for a baseline 3-pointer that put the Illini up 69-66.

Paul’s 43 points was the third-highest scoring performance in Illini history and he tied a school record with eight 3-pointers. He also had a team-high eight rebounds.

Leonard added 14 for Illinois and Bertrand and D.J. Richardson scored 10 each.

Ohio State looked ready to put the Illini away early in the second half, stretching its lead to 48-37 in the opening two minutes on an efficient run that yielded nine points over four possessions. The last three points came from Thomas on a jump shot and a free throw.

Weber told his team in a huddle that it was a make-or-break point in the game.

Illinois ran off its own 7-0 run, pulling to with two at 48-46 on a 3-pointer by Richardson. Paul stole the ball from Sullinger, broke down the court and quickly fed his junior teammate. It was the kind of run Illinois was able to answer with all night.

“We just let down,” Matta said. “We’ve got to find another gear about us.”

Ohio State did pull away yet again, going up 52-46 on a short turnaround jumper by Sullinger over Leonard with 14:25 left in the game.

The Illini then scored eight straight, taking the lead 55-54 with a baseline jumper by Leonard with 11:18 to play. The run’s other six points came, not surprisingly, from Paul on a pair of 3-pointers. The second a sky-high bomb that dropped cleanly through the net and ignited the crowd.

On Illinois’ next possession, Paul drew what the officials judged to be an intentional foul by Craft, sinking two of his three shots and giving the Illini a 57-54 edge with just under 11 minutes left.

Buford answered a long miss by Paul with two points on outside jumper that tied the game again at 61.

Paul had a confounding first half, the kind Illinois fans have gotten used to.

He committed four of Illinois’ 10 first-half turnovers (and finished with seven).

“I had way too many turnovers,” he said. “I have to take care of the ball better.”

Most of that run came with Sullinger on the bench.

Paul’s 3-pointer with 6:23 to play in the half tied the game at 23, and Sullinger quickly left the bench to come back in.

Sullinger didn’t score until almost nine minutes were gone in the first half, and was frustrated by a combination of tenacious defense from Leonard and Paul.

Sullinger took the hint, moving to the perimeter where he hit two first-half 3-pointers.

The second, over a desperate Leonard lunging toward the 3-point line to reach him, gave the Buckeyes a 34-29 lead with 2:19 left in the half.

Even with 21 points, Weber said he was happy with defense against Sullinger, particularly from Leonard.

“It’s truly a heavyweight battle with those two pounding on each other all the time,” Weber said.