Reds to host Tribe in annual ‘Battle of Ohio’

The Finals: It’s James vs. Durant as Heat face the Thunder for NBA title 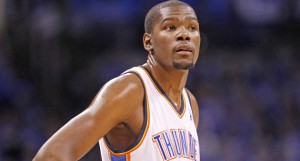 The Oklahoma City Thunder's Kevin Durant will lead his team against the Miami Heat and LeBron James as the NBA Finals get underway on Tuesday night. (The Ironton Tribune / MCT Direct Photo)

Either could make a case as the best player in the NBA.

One of them is about to get the only crown he craves, their head-to-head duel the leading story line of the NBA finals that begin Tuesday night when Durant and the Oklahoma City Thunder host James and the Miami Heat.

Both insist the series is more than an individual matchup and the All-Star talent around them supports the claim. But the focus will be on James, the three-time MVP in his third shot at a championship, and Durant, the three-time scoring champion who is playing for his first at age 23.

It’s the first time the MVP and scoring champ have met in the finals since 1997, when Michael Jordan’s Bulls knocked off MVP Karl Malone and Utah.

“Everybody is going to make the most out of the matchup of me versus LeBron, but it’s the Thunder versus the Heat,” Durant said. “One guy versus another guy, it’s not going to be a 1-on-1 matchup to win the series, it’s going to be all about the team.”

They are friends and workout partners, play the same small forward position and are blessed with unlimited basketball talent. After years of waiting on a James-Kobe Bryant finals matchup that never materialized, the league gets one that’s perhaps even better, if not quite as sexy, to wrap up a successful season after the lockout.

“It’s great for the NBA,” Miami’s Shane Battier said. “I anticipate record ratings, which is great, so maybe we can get some of the escrow check back from the owners. First and foremost, that’s why I’m excited to see Kevin Durant versus LeBron James. But selfish reasons aside, it’s just a great matchup.

“There’s so many young, great players in this league and established players and All-Stars. If you’re a basketball fan, you’re missing out if you’re not watching this series.”

Both have sworn off Twitter, at least for the time being, James posted his last message on April 27 and Durant on May 1.

For now, KingJames and KDTrey5 will stick to making their statements on the court.

“Kevin is locked in on what he needs to do to help the team win,” Thunder All-Star point guard Russell Westbrook said. “It’s going to be a great series for both teams and hopefully we can come out with the win.”

James is back for a third crack at his first championship, his Cleveland Cavaliers swept aside by San Antonio in 2007 just a couple of weeks before Durant was drafted by the then-Seattle SuperSonics with the No. 2 pick in the draft.

James fell short again last year in his first season with Miami, then carried the Heat to another chance with victories in the final two games of the Eastern Conference finals against the Celtics, starting with a sensational, 45-point, 15-rebound Game 6 performance in Boston.

“You know, third time in the finals in nine years, there’s a lot of guys who don’t get there once,” Wade said. “Of course, that right there in itself is an honor. But you want to win one. You want to get there and win one. Obviously, LeBron wants to win a championship. I can’t say that he wants to win more than the next man, than anybody on OKC. I can’t say that. But obviously he wants to win and get another opportunity. I’m sure he will try to seize it a little bit better than he did the first two times.”

A disappointment last year in the Heat’s six-game loss to Dallas, James has said he’s been in a better frame of mind this season and is looking forward making up for his previous failure.

“I didn’t play well. I didn’t make enough game-changing plays that I know I’m capable of making and I felt like I let my teammates down,” he said.

“I’m happy and I’m humbled that I can actually be back in this position less than 12 months later to do a better job of making more plays, more game-changing plays out on the floor on a bigger stage. So we’ll see what happens.”

Though their core of Durant, Westbrook, sixth man of the year James Harden and Serge Ibaka are all 23 or younger, the Thunder enter as the favorites in their first finals appearance since moving to Oklahoma City from Seattle in 2008.

With signs backing the Thunder hanging from buildings throughout the city, Oklahoma City has watched Durant grow up from the player who arrived here as the rookie of the year. He received some guidance along the way from James, who reached out to him as a high school and then invited him to his home in Akron, Ohio, to work out last summer.

“For me, I understood what the situation he was getting himself into being drafted as high he was, and the things that came with being drafted to a team that needed a marquee player or superstar,” James said. “You know, from Day One I always lent my hand out to guide him if he needed it through anything, and that’s on and off the floor, because to that point I seen everything, and I’m still learning but I’ve seen everyone on and off the floor.

Only one can be considered the best player in the game, and it’s probably the guy who walks out of this series as a champion.

A position-by-position look at the matchups in the NBA finals between the Oklahoma City Thunder and Miami Heat:

CENTER: Kendrick Perkins vs. Udonis Haslem. Perkins brings the NBA finals experience most of his young teammates lack, having been part of Boston teams in 2008 and ‘10. He had a rare high-scoring night in Oklahoma City’s regular-season win over Miami, scoring 16 points on 8-of-11 shooting. His time on the court in this series could depend on the Heat’s lineups, because with Haslem and Chris Bosh both often more perimeter oriented, the Thunder may need to go small. Edge: Thunder.

POWER FORWARD: Serge Ibaka vs. Shane Battier or Chris Bosh. Ibaka has turned into more than just one of the NBA’s top defensive players, having a 26-point outing on 11-for-11 shooting in Game 4 of the Western Conference finals. He is shooting 55.6 percent in the postseason, best among players who advanced past the first round. The Heat have options for their rotation now that Bosh looks back to full strength after scoring 19 points and making three 3-pointers in the Heat’s Game 7 victory over Boston to win the East. Battier, whose shot had been off most of the postseason, made four 3s in the game and hit three in both games against Oklahoma City during the season. Edge: Even.

SMALL FORWARD: Kevin Durant vs. LeBron James. Durant is the best scorer in the NBA, James probably the best all-around player. That includes his defense, and though Durant is a three-time scoring champion who has stretches where he’s unstoppable, James has as good a chance as anybody in the league. He helped force Durant into a career-high nine turnovers in Miami’s 98-93 home victory. And it’s James who is actually the best scorer in this postseason, averaging 30.8 points. Edge: Heat.

SHOOTING GUARD: Thabo Sefolosha vs. Dwyane Wade. The Thunder began to change their series against the Spurs when they put Sefolosha, their best perimeter defender, on point guard Tony Parker. Now he goes back to defending a shooting guard, and one of the best in the league. Wade would surely welcome 1-on-1 coverage after the Celtics frequently double-teamed him while Bosh was out. Edge: Heat.

POINT GUARD: Russell Westbrook vs. Mario Chalmers. The Heat had all kinds of trouble with the Celtics’ Rajon Rondo and they sure won’t like playing against Westbrook, another speedy, do-everything point guard. He is prone to some poor shooting nights, such as 4 for 16 and 9 for 26 efforts in the regular season against Miami, but also has the potential to be the force that Rondo was in the last round. Edge: Thunder.

RESERVES: James Harden, Derek Fisher, Nick Collison, Daequan Cook and Nazr Mohammed vs. Bosh or Battier, Mike Miller, Joel Anthony, Ronny Turiaf and Norris Cole. If Bosh continues to play as a reserve, as he has in the three games since returning from a strained lower abdominal, Miami has some punch off the bench. Even so, the Thunder are better behind Sixth Man of the Year Harden, and Fisher is always good for a big shot or two this time of year. Edge: Thunder.

COACHES: Scott Brooks vs. Erik Spoelstra. Spoelstra was outcoached by Rick Carlisle in last year’s finals but gets another chance now, seemingly with his full complement of players to allow him to mix and match. Brooks appears to have more options, and the 2010 Coach of the Year’s move to change his defensive coverage and put Sefolosha on Parker in the last round slowed a Spurs team that had been in an offensive groove for weeks. Edge: Thunder.