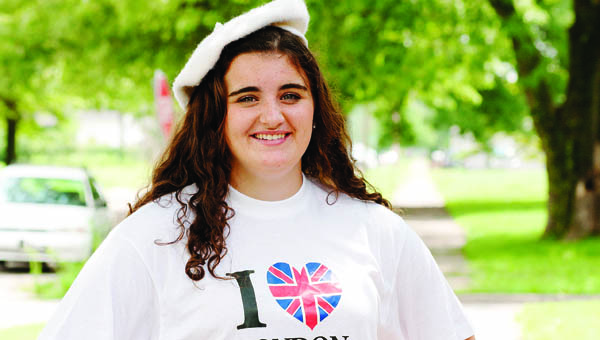 Meghan Brown recently returned from her European trip with the People to People Ambassador Program.

It was a once-in-a-lifetime experience that left an Ironton High School student happy for the opportunity and happy to be home now that it’s over.

Meghan Brown, who is part on this year’s IHS junior class, made a 19-day tour of Europe June 18 to July 8 with People to People, an American program created at the behest of former President Dwight Eisenhower that allows U.S. students to see life in other countries.

Brown said she was excited to be going on the trip to Paris, London and other parts of Europe she had, until now, only seen in books and on television.

“I was a little scared at first because I was not going with my parents,” she said. “But I saw a lot of gorgeous places.”

Tops on her list was Belgium. She said Brussels reminded her of home.

“The people were friendly and they kind of knew each other. They had parades and that was so cool. It just seemed more comfortable,” Brown said.

Belgium had something else for which Brown she developed a definite affinity.

“The chocolate….” She said. Laura Brown said her daughter have have really liked the chocolate: Meghan didn’t make it home with a single piece.

Wales was another favorite, mainly for its scenic beauty.

“The hills and grass, (it was) very beautiful,” Brown said. “England was very chaotic, lots of traffic but the architecture was amazing, beautiful.”

She liked Ireland, too, because the food was good.

“One night we had roast beef with potatoes and carrots,” Brown recalled.

The trip did provide opportunity for adventure and community service.

“We rappelled from a castle wall in Wales,” Brown remembered. The group also cut peat for charity while in the British Isles, where in some places it is burned for heat.

Along the way she also learned there’s no place like home. The group was allotted five minutes for showers and their blow dryers and flat irons wouldn’t work without special adapters.

They had to hand wash their clothes; they were not permitted to use washers and dryers in the places they stayed. Everything she needed for the trip had to fit in one carry-on and one suitcase and weigh no more than 45 pounds. And some customs she found were surprising.

“You had to pay to go to the bathroom mostly everywhere,” she said. “In Amsterdam they rode bikes.”

Some memories are of somber places: The American delegation visited the house where Anne Frank and her family hid from the Nazis during World War II; they also saw the beaches of Normandy where the D-Day Invasion occurred.

Brown said she loved the trip and wanted to visit again.

“Maybe not Paris, but (I want to go back to) Brussels, definitely Brussels,” she said.