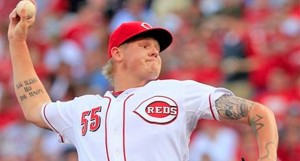 Cincinnati pitcher Mat Latos pitched 7.1 scoreless innings and hit a two-run home run as the Reds blanked the Pittsburgh Pirates 3-0 on Friday in a Central Division showdown. (Photo Courtesy of the Cincinnati Reds)

CINCINNATI (AP) — Mat Latos has dominated Pittsburgh on the mound throughout his career.

On Friday night, he also did damage at the plate.

Latos pitched shutout ball into the eighth inning and hit a two-run homer as the NL Central-leading Cincinnati Reds opened a three-game series against their closest pursuers with a 3-0 win over the Pirates.

Perhaps the only person happier than Latos was Reds manager Dusty Baker.

“It was Latos’ night, hitting and pitching,” Baker said.

Chris Heisey hustled for an inside-the-park home run and Aroldis Chapman closed out the win that gave the Reds a 4 1/2-game lead over the Pirates.

The Reds have won 14 of 15 and moved 24 games over .500 for the first time since 1999. They are 15-3 since All-Star first baseman Joey Votto left the lineup with a torn meniscus in his left knee that required surgery and 3-0 since second baseman Brandon Phillips was sidelined with a strained left calf. Phillips is expected to start Saturday, Baker said.

Latos (10-3) allowed four hits in 7 1-3 innings. Jonathan Broxton got a key double play to end the eighth and Chapman recorded his 24th save.

“Swing hard in case you hit it,” he said about his approach. “That’s the best I’ve got.”

Zack Cozart added three hits for the Reds. The series was Cincinnati’s first against a team over .500 after five straight against clubs with losing records.

Latos allowed just one runner past second base, none after the first inning. He struck out five, walked three and improved to 4-0 in five career starts against the Pirates.

“Fastball command and getting strike one was a big key,” Latos said. “My slider wasn’t as sharp as normal. My breaking ball wasn’t was sharp, but the defense was stellar today.”

“He has just enough to get you with that high pitch, and he can bury a pitch in the dirt when he wants to,” Hurdle said.

Broxton entered with runners on first and second. The newly acquired reliever got pinch hitter Gaby Sanchez — acquired from Miami right before Tuesday’s trading deadline — to ground into Pittsburgh’s third double play of the night.

Chapman struck out two in the ninth. He hit Andrew McCutchen with a pitch with two outs.

The Reds already led 1-0 in the fifth when Latos followed Ryan Hanigan’s two-out single with a 367-foot drive into the left-field seats for his first homer of the season.

Asked if he hit a fastball, Latos replied: “You’re asking me?”

Rodriguez confirmed the pitch was a fastball.

“I was surprised he swung,” Rodriguez said. “It was a fastball on the outside of the plate. That was a big, big mistake. I was really surprised.”

Rodriguez, acquired by Pittsburgh from Houston for three minor leaguers on July 24, has lost his last four decisions and is 0-1 in two starts with the Pirates. He allowed seven hits and three runs with no walks and four strikeouts.

Heisey put the Reds ahead in the second when he lofted a drive to deep left field that eluded Starling Marte’s attempt at a leaping catch. The ball glanced off the wall and rolled toward left-center field, and Heisey was waved home by third base coach Mark Berry and just beat the relay to the plate.

“When I hit it, I knew it would be close,” Heisey said. “When I hit second base, I saw it hit off Marte’s glove and roll toward center field. I didn’t see McCutchen close, so I knew I had a chance.”

The inside-the-park homer was Cincinnati’s second of the season and the second of Heisey’s career. He hit one on Aug. 2, 2010, at Pittsburgh. Jay Bruce hit one on June 15 against the Mets in New York.

NOTES: The sellout crowd was Cincinnati’s 10th of the season. The Great American Ball Park single-season record of 12 was set last season. … Reds manager Dusty Baker, assessing McCutchen, said, “If I had to pick an MVP, it would probably be him.” … The father-and-son acting team of Martin and Charlie Sheen was on hand. Martin Sheen is from Dayton and his son is an avid Reds fan. … Hall of Fame Reds broadcaster Marty Brennaman had his head shaved on the field after the game. He told bench coach Chris Speier earlier this season that he would have his head shaved if the Reds won 10 straight games, a streak they achieved last Sunday.