Herd offense not enough to win 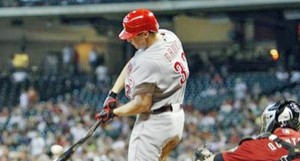 Cincinnati Reds' outfielder Jay Bruce hit his 29th home run of the season on Sunday, a three-run shot that tied the game at 3-3. The Reds went on to beat the Houston Astros 5-3. (Courtesy of the Cincinnati Reds)

HOUSTON (AP) — Cincinnati manager Dusty Baker and a number of the Reds enjoy playing in Houston, and are disappointed that this weekend was their last trip here to play the Astros as National League Central rivals.

But when Houston moves to the American League next season, Texas-born Jay Bruce will miss visiting Minute Maid Park several times a year more than most.

Bruce’s three-run homer keyed Cincinnati’s five-run eighth inning and the NL-Central-leading Reds rallied for a 5-3 win over the Astros on Sunday.

“Absolutely,” Bruce said when asked if he’d miss trips to Houston. “Obviously I like playing here and stuff, but more for just my friends and family. That has always been a thing that I have enjoyed a lot.”

Houston led by three entering the eighth before Drew Stubbs walked with one out and Brandon Phillips singled to chase Hector Ambriz. Left-hander Xavier Cedeno (0-1) came in and watched his first pitch sail into the seats in right field on Bruce’s 29th homer to tie it at 3-all.

Bruce, who is from nearby Beaumont, Texas, has three homers and 10 RBIs in nine games here this season. Fans could be heard bellowing “Bruuuuce,” each time he came to the plate, and there were a group of five people with red shirts each sporting one letter of his last name in the crowd.

“That was so cool,” Bruce said of the fans who spelled his name. “There’s a lot of people here that I do know, but I didn’t know them personally. They travel well from Beaumont.”

Bruce was happy to get another shot at Cedeno after he struck him out in the ninth inning of Saturday night’s 2-1 loss.

“It was a chance for redemption there,” he said. “It worked out this time.”

Bruce is much better against right-handers than left-handers, but Baker is encouraged with the progress he’s made hitting lefties.

“He’s learning how to hit,” Baker said. “His average still isn’t where he wants it to be, but he’s learning to make them put the ball up and not chasing down.”

Pinch-hitter Chris Heisey’s RBI double off the left field wall put the Reds up 4-3, before they tacked on an insurance run with a double by Miguel Cairo — their fifth straight hit of the inning.

“It looked bad for a while,” Baker said. “We didn’t have a whole bunch of chances, but we got some guys on base late and got some good hits.”

Jose Arredondo (6-2) allowed two hits and two runs in the seventh for the win and Aroldis Chapman pitched a perfect ninth to extend a franchise record with his 26th straight save and 34th overall.

Tyler Greene had a solo homer for the Astros, who have lost seven of their last eight.

“It’s always frustrating to lose, but we were in it there at the end,” Greene said. “We gave ourselves a chance to win, but we’ll have to learn from what we did today.”

The bullpen collapse denied Houston starter Bud Norris the win. He scattered three hits over six shutout innings with six strikeouts, but remains winless since May 21 — a span of 16 games.

Houston took a 1-0 lead when Phillips bobbled a would-be double play ball hit by Brian Bogusevic that allowed him to reach and Matt Dominguez score.

With Jason Castro on first after a walk in the seventh, Martinez hit a triple that rolled around on Tal’s Hill in center field and extended Houston’s lead to 2-0.

Martinez was picked off at third before Greene’s two-out, full-count homer to the Crawford Boxes in left field off Arredondo.

Reds starter Bronson Arroyo yielded three hits and a run in six strong innings for the Reds, whose 82 wins are the most in the majors.

Cincinnati had trouble getting much going offensively early. Xavier Paul singled with two outs in the second and the Reds didn’t get another hit until Stubbs singled in the sixth. Zack Cozart had reached on an error by Greene before the hit.

A single by Phillips loaded the bases with no outs.

Norris wriggled out of the jam by striking out Bruce before Todd Frazier grounded into a double play to end the inning.

Phillips robbed Greene of a hit in the third inning when he fielded the grounder barehanded and made the throw to first.

NOTES: Reds manager Dusty Baker said the Reds will see how injured first baseman Joey Votto feels on Monday before they decide if he’ll come off the disabled list. Votto, who has been out of the lineup since July 16 recovering from two surgical procedures on his left knee, homered in a rehabilitation game with Triple-A Louisville on Saturday night. … Cincinnati recalled C Devin Mesoraco from Louisville on Sunday. … The Reds return home Monday to open a three-game series with Philadelphia and Houston travels to face the Pirates. … Baseball Hall of Fame broadcaster Milo Hamilton, who had the memorable call on Henry Aaron’s 715th home run and is retiring as the radio voice of the Astros after the 2012 season, was honored with “Milo Hamilton Day” at Minute Maid Park on his 85th birthday Sunday.