Police officers go above and beyond

Sorghum fest pays tribute to past 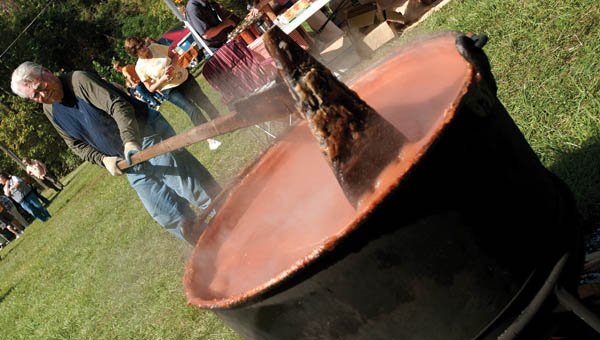 David Simpkins stirs the pot as he helps to make a batch of apple butter during the annual Sorghum Festival, in South Point, Saturday.

SOUTH POINT — The sugar cane juice flowed steadily through a black hose down the hillside from the grinding gin to super hot trays that were turning it into that sweet sorghum everybody came for.

Saturday was the 14th year for the Sorghum Festival off Sand Road in South Point, the brainchild of Ivan Smith and Bill Enyart on land owned by Smith. And for all of those preparing the old-fashioned treats the day was an early one.

Lowell Moon started at about 6 a.m. getting the oak-fire hot enough to transform the cane juice into thick molasses. Working along side him was his daughter, Barbi Theado, who pushed a skimmer through the trays to pull off the thick starch that would come to the top of the liquid.

“We try to go for a nice amber color,” she said. “Then it has a milder taste. But it is a little more labor intensive.”

Up at the top of the hill grinding mounds and mounds of cane were Theado’s uncle, Robert Ross, and her husband, Brad Theado.

The recipe for the sorghum came from Theado’s grandfather, Minuard Moon, who taught his family the art and intricacies of the process from the time they were children. Many of the tools used Saturday had been used by the elder Moon.

Before the juice got to the cooking trays, it was strained several times through burlap-covered barrels to pull out any pieces of stalk.

Across the field the South Point Order of Eastern Star Chapter 404 was stirring up apple butter bubbling up in a cast-iron kettle over an open fire. Making and selling the apple butter for the chapter was the idea of Clarice and Bill Sparling about 30 years ago.

“We went up to Bob Evans Farm to learn how Bob Evans would have done it,” Clarice said.

And they haven’t change a step in the process since.

Dan Fulks was nearby with his massive kettle cooking pinto beans and ham hocks. For the past 17 years he has cooked beans for festivals in the Tri-State and has fine-tuned the recipe.

“I’ve always believed in cooking them hard for about an hour and a half and then let them simmer,” he said.

While the cooks tended to their kettles, bluegrass musicians played from a makeshift bandstand and children got to climb up on the hay wagon for rides around the property as one of the first fall festival in the area opened the season.