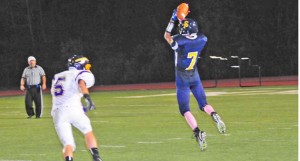 The preliminaries are over and now teams will begin their Ohio Valley Conference title chase.

The Coal Grove Hornets (1-3) are the odds-on favorites to win the league, but the Fairland Dragons (2-3) and Chesapeake Panthers (1-4) have shown improvement and could pose a challenge.

The Rock Hill Redmen (0-5), South Point Pointers (0-5) and River Valley Raiders (1-4) are all young and inexperienced. But with five games under their belts, all three could present a surprise.

The Southern Ohio Conference Division I also starts play and the Symmes Valley Vikings (4-1) and Green Bobcats (3-2) meet in their annual rivalry.

The Vikings are the preseason favorites, but Green has already shown it can score.

The key word here is turnovers.

The Hornets were plagued by turnovers last week — three interceptions and two fumbles — in a loss to Bishop Ready. Rock Hill had three turnovers in their loss to Wellston last week and three more in a loss to Portsmouth West the previous week.

The Hornets have shown balance on offense this season but still prefer their running game.

Coal Grove got 105 yards on 16 carries from Kyle Estep last week in the loss to unbeaten Ready. Fullback Brandon Hogsten leads the team with five touchdowns.

Rock Hill has done most of its damage on the ground. Freshman Chance Blankenship has 252 yards on 28 carries, Jacob Malone — who was injured in the first quarter last week — has 153 yards on 44 attempts while Shane Harper has gained 148 yards on 44 tries in three games.

Both the Pointers and Dragons are fighting youth and inexperience.

Injuries have hampered the Fairland offense with leading rusher Nathan Campbell sitting out the past two games. In the first three games, Campbell ran 43 times for 215 yards — a 5.0 average per carry — and he scored four touchdowns with three coming on the ground.

Fullback Tyree Ceasar has taken over most of the running game load with 63 carries for 360 yards, a 5.7 average and he has scored three TDs.

Quarterback Chance Short is 27 of 57 for 347 yards and five interceptions with three touchdowns.

Campbell also has seven catches for 104 yards. Kyle Sowards leads the Dragons with nine receptions for 114 yards and a score.

A tough non-league schedule has made it tough on the offense and defense.

The running game has had little impact. Quarterback Gage Townson leads the team with 98 yards on 48 carries. He has also completed 18 of 68 passes for 288 yards and three touchdowns with five picks.

Josh Browning leads the Pointers with six catches for 144 yards and Larry Brandon has five grabs for 62 yards.

Chesapeake has been showing improvement each week and the offense has been able to mix up their running and passing game.

Running backs Jacob Collins and Nate Jones have rushed for 264 yards each. Jones is averaging 7.3 yards a carry and Collins 5.3 each attempt.

Quarterback Caleb Lindsey is 27 of 59 for 427 yards and two TDs including a 222-yard performance last week when he connected on 11 of 21 passes.

Javon Thompson leads the team with 12 receptions for 211 yards and a score. Jones has six catches for 122 yards.

River Valley has struggled on both sides of the ball. The Raiders have scored a league-low 61 points while allowing 184 points, nearly 37 a game.

The Vikings will test the Green defense with their ground game that has racked up 2,445 yards on the season for an average of 489 yards per game.

Alerc Herrell leads the team with 734 yards on 48 carries for a whopping 15.3 average and he has scored 10 touchdowns.

The Vikings have just 60 yards passing on the season.