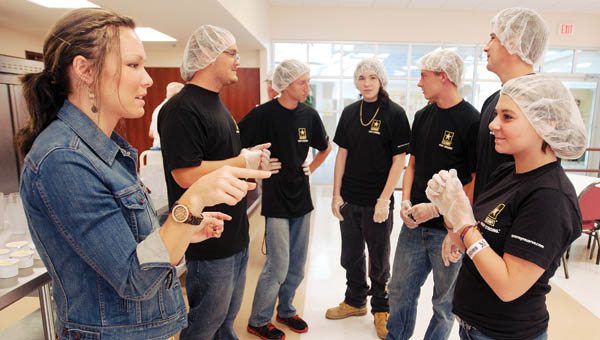 ASHLAND, Ky. — The Army Club at Dawson-Bryant High School is only about two weeks old, but its members have already dived head first into community service projects.

Tuesday, six members of the newly formed club served lunch at the Ashland Community Kitchen. The students brought trays of goulash and green beans to the diners and principal Steve Easterling even helped dish up the meals.

“We’re all on board with community service,” said junior Chris Camp.

Camp said he hoped the group would brighten up the days of those in attendance.

“To make everyone’s stay a little better,” he said. “Even though their lives are already rough.”

Freshman Katie Ferguson said she was nervous at first about carrying the food, but after everyone was served, she said it was easier than she thought.

The Army Club meets during lunch at the high school every week. Sgt. Edward Dugas of the Ashland, Ky., U.S. Army Recruiting Station advises the group.

Members of the club have expressed an interest in joining the military, and since Dawson-Bryant doesn’t have an ROTC program, the club gives the students a chance to ask Dugas questions about the military.

Senior Anthony Pemberton said he is already signed up for the Army and will head off to basic training after graduation.

Dugas said the club plans to return to the Ashland soup kitchen to serve meals again. Also, club members hope to adopt part of a highway to keep it clean.

Lacy Stephens, VISTA worker at the soup kitchen, said volunteers are always needed. Any groups interested in helping can call the Ashland Community Kitchen at (606) 325-8144 to set up a day to serve.