Jail or Bail will put county leaders behind bars 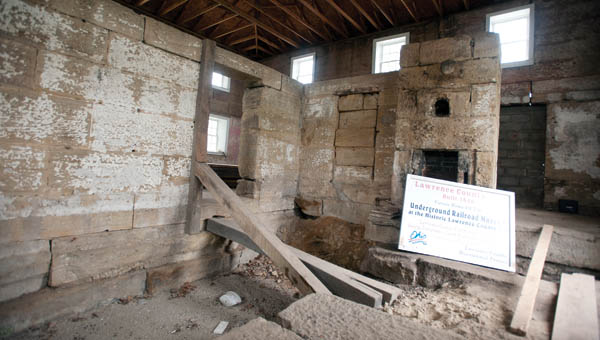 While there is much work still to be done on the interior of the Old Jail, the future plans include a museum featuring Lawrence County’s early history and the local story of the Underground Railroad.

Masses of warrants have gone out for Lawrence County politicians, school personnel and business supporters. They are expected to be incarcerated this weekend, but not because they have broken any laws.

The Historical Jail Preservation Corp. is sponsoring Jail or Bail this Saturday from 10 a.m. until 6 p.m. at the Old Jail on the 7400 block of County Road 1 in Burlington as a way to raise the money needed to revitalize the property. Future plans are to open an Underground Railroad museum in the jail, featuring Lawrence County’s early history and involvement in the Underground Railroad.

The individuals will raise their own bail money and will have their mug shots taken to keep as a memento.

The event is open to the public and people are welcome to tour the Old Jail to see the work that still needs to be completed. The neighboring Josiah Riley Log Cabin will also be open to the public during this time. Concessions will be available, including hot dogs, barbeques, chips and drinks, with all proceeds going to the revitalization project. Families are encouraged to attend this event at the Burlington Commons Park.

This is the first time the group has had this fundraiser.

“A couple of our committee members thought this up and brought it before the board, and we thought it was an excellent idea,” Ramsey said. “Hopefully it will be fun as well as profitable.”

The group hopes to raise at least $10,000 for the project with this event, though more than that would be welcome. Ramsey said everyone she has talked to about the event has been very cordial and supportive.

Ramsey said she feels it’s important to preserve this property because it is the only remaining building from the first county seat.

“We are proud of our little individual area, of our old place,” Ramsey said. She said keeping history alive is important for all of us.