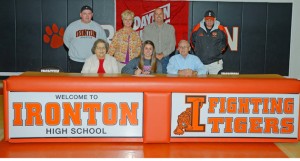 The University of Dayton is a softball program that is climbing upward, and Ironton’s Rebekkah Potter is hoping to help it reach the top of the ladder.

Potter weighed numerous offers with Dayton and Ashland University rising to the top of the list.

But it was LaPlaca and the Dayton program that ultimately swayed her decision.

“I like the way she coaches and I wanted to play Division I,” said Potter who signed on the first day of the early signing period.

LaPlaca was equally pleased about landing Potter in the 2012 recruiting class.

“Having a quality student-athlete like Rebekkah Potter join our program is exciting. She brings a very competitive energy and will fit perfectly in our system,” said LaPlaca.

“Rebekkah possesses tremendous defensive range, a strong bat, and a keen sense on the bases. We expect her to make an immediate impact. Our entire 2013 recruiting class will continue to help this Dayton Flyers’ program soar to new heights.”

Potter was a first team coaches’ all-district selection and was also chosen second team All-Ohio as a junior. She was also named to the Coaches All-Ohio Underclassmen tournament team as well as to the Ohio High School Athletic Association Addidas’ Futures Team.

Last season for Ironton, Potter hit .416 with seven home runs, 51 runs batted in, seven doubles, two triples and 12 walks. She was successful on 15 of 18 stolen base attempts and scored 43 runs. She struck out only 10 times all season.

Potter was an all-district selection as a freshman, but she missed her sophomore season due to a torn ACL injury.

Although she went through rehab to repair the knee, she tore it again during warm up exercises and was forced to go through the rehab process again under the guidance of Dave Coburn at Tri-State Physical Therapy in Ironton.

Potter was up to the challenge, but she did express some concerns about the situation.

“I missed out one summer ball and a high school season. I was afraid I was running out of time to get recruited because coaches couldn’t see me,” said Potter.

It was another injury that jump-started her routine workouts and helped create an outstanding work ethic.

“When I broke my ankle in the seventh grade I went to rehab and never stopped,” said Potter.

Softball has been in Potter’s blood since she played for the Ironton Little League teams at the age of nine. Her obsession was fueled by the help her father, Jimmy Potter, gave her at the drop of a hat.

“I always liked it. It was always me and my dad in the backyard passing. He kind of pushed me, but if I said, ‘Dad, let’s go hit’ or ‘let’s go pass’ he’d say ‘OK.’ He was always there for me,” said Potter.

Dayton was 22-29 last season and just missed qualifying for the Atlantic 10 tournament. However, the Flyers did qualify for the tournament the previous year for the first time since 2000.

The Flyers belted a team record 48 home runs in 2011 and slugged another 42 last year. Also last season, the pitching staff proved to be on the rise with its best strikeout total in more than 10 years.

LaPlaca may be a perfect fit for Potter as the rookie shortstop enters the college level. The Flyers’ sixth-year head coach has worked well with first-year players. The Flyers have had at least one player named to the Atlantic-10 All-Rookie Team since 2006.

Although Potter has played shortstop throughout her career, she doesn’t care where she plays at the next level.

“I’ll have to earn my position like anyone else,” said Potter. “They need middle infielders. I’m a shortstop, but the way (coach LaPlaca) does it she’ll mix up second base and shortstop. I’ll play wherever she needs me.”

Potter’s ability to hit for average and power add to her chances of playing early.

“Coach said she wants a shortstop who is a good fielder and she doesn’t worry about their offense. She said my being able to hit is a bonus,” said Potter whose infield throwing speed has been clocked at 66 miles an hour.

An outstanding student, Potter plans to major in chemistry at Dayton.