Search on for director 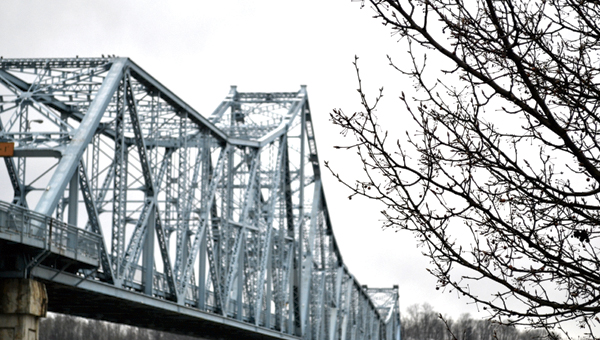 A two-hour inspection of the Ironton-Russell, Ky., Bridge showed there was virtually no damage to the structure following a collision from a barge, according to the Ohio Department of Transportation.

The accident, which happened at approximately 10:30 p.m. Saturday, closed the bridge until noon Monday. An engineer and inspector from ODOT’s District 9 office came down Monday morning to conduct a physical inspection.

“Nothing was taken out,” Kathleen Fuller, ODOT spokesperson, said. “No cracks, just a scrape. There was a very insignificant amount of damage. A pier had been scraped, very minor.”

ODOT officials used a barge from Brayman Construction of Saxonburg, Pa., the contractor currently working on a new bridge down river from the aging structure, to make the visual inspection.

Brayman was awarded an $81.2 million contract for that bridge and started construction in early March.

“Everything is going well,” Fuller said of the new construction. “They are going to be working during the winter months, just on a lighter schedule, as with what will be going on in the spring and summer.”

By the time the bridge is complete, it will be constructed of more than 8.2 million pounds of steel and nearly 24,395 cubic yards of concrete. In 1999, a design process began to replace the bridge. When ODOT was ready to award a contract, bids came in more than $20 million over estimates.

Plans for the new bridge were tabled, redesigns moved slowly and the project hit other snags tied to funding and the economy. Saturday’s closure was the second time this year that the 1920s structure was shut down. In November a motorist reported that the decking of the bridge had dropped.

However, an inspection from the Ironton garage of ODOT and District 9 showed there had been no drop. At that time the bridge was shut down for only an hour.

That bridge will be brought down the next year, also by Brayman Construction.