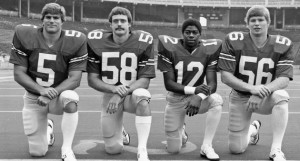 Former Ironton lineman Ken Fritz (56) was a two-time captain for the Ohio State Buckeyes along with Jim Laughlin (5), Tom Waugh (58) and Mike Guess (12). Frtiz will be part of the first Ironton High School Athletic Hall of Fame on Jan. 26. He is one of five inductees that include George McAfee, Coy Bacon, Mike Burcham and Bob Lutz.

The class has been chosen and the induction dinner planned. Now it is time for the festivities.

The dinner will be held at approximately 7:15 p.m. on Saturday, Jan. 26, in the Ironton High School cafeteria. The festivities are being held in conjunction with the Ironton Basketball Shootout being held earlier in the day.

The Ironton boys will play Akron Buchtel in the final game at 5:30 p.m.

Tickets are $10 in advance for the shootout and clinic. Tickets at the door are $15.

Tickets will go on sale Tuesday at Ironton High School in the auto shop office and at Iron City Hardware. Persons can also contact Tiger Clan member Rick McKnight at (740) 525-8011.

Here are the first-year inductees:

McAfee led Ironton High School to an undefeated season in 1935 and was named first team All-Ohio. He then went to Duke University where he was a two-time All-American.

After college, McAfee played for the Chicago Bears and legendary coach George Halas who called him “the greatest running back I ever saw.”

During his career, he scored 234 points, gained 5,313 combined yards, intercepted 25 passes in eight seasons, and was the record for punt return average at 12.78 yards and was the NFL punt return champion.

He led the league with a 7.3 yards per carry average during his rookie season and scored 12 touchdowns in an 11-game season.

Known for his explosive speed, McAfee was on three NFL championship teams and was named All-Pro three times and to the 1940s All-Decade Team. He was enshrined into the Pro Football Hall of Fame in 1966.

His No. 5 jersey was retired by the Bears.

Bacon was an outstanding football and basketball player at Ironton High School who went on to play at Jackson State. He then played a year of minor league football for the Charleston Rockets where he was discovered by a Dallas Cowboys’ scout and signed to the team’s taxi squad.

When starting defensive tackle Roger Brown went down with an injury, the Los Angeles Rams traded for Bacon in 1968. He became a starter on the defensive line and was part of the Fearsome Foursome that included Lamar Lundy and future Hall of Fame players Deacon Jones and Merlin Olsen.

In 1973, San Diego needed a pass rusher and traded for Bacon. It was during that season he returned an interception 80 yards for his only career touchdown.

He was traded to the Cincinnati Bengals in 1976 and set a then-NFL record with 21.5 sacks. The original total was 26 but was downgraded by the NFL. He was voted the Bengals’ Most Valuable Player and was a second-team All-Pro and was selected to the Pro Bowl.

Washington traded for Bacon in 1978 and he set a franchise record with 15 sacks in 1979 and had 11 the next year. He finished his career with the Washington Federals of the USFL.

Bacon was inducted into the American Football Association’s Semi Pro Football Hall of Fame in 1986.

Fritz was and three-year starter at Ironton High School where he played on two playoff teams. He was named the 1975 Associated Press Ohio Class AA Lineman of the Year. He was also voted the SEOAL Co-Player of the Year, a rare accomplishment for a lineman.

Fritz played at Ohio State and was a four-year letter winner and a three-year starter at guard. He was named first team All-Big Ten in 1978 and 1979, and was a two-time first-team Association Press All-American. He was also a two-time team captain.

Fritz helped lead Ohio State to the Big Ten championship in 1979, an 11-0 regular season, and a berth in the Rose Bowl. Top-ranked Ohio State lost 17-16 to Southern Cal, costing the Buckeyes the national championship.

Fritz was later drafted in the 10th round of the NFL draft by the Super Bowl champion Pittsburgh Steelers.

Burcham is a 1961 graduate of Ironton High School where he played football and baseball.

Burcham went to the University of Rio Grande where he was a standout catcher in baseball. He set the school’s all-time home run record that still stands and was elected to the schools Hall of Fame.

Burcham was the head baseball coach at Ironton for 17 years and posted a 323-129 record. His teams won seven league championships, 10 sectionals, four districts, one regional and the 1972 Class AA state championship.

He was elected to the Ohio High School Baseball Coaches Association’s Hall of Fame.

A long-time football assistant coach, Burcham also served as the school’s athletic director for 30 years and was elected to the Ohio High School Athletic Directors’ Hall of Fame.

Lutz retired as the Ironton High School head football coach in 2012 as the Ohio High School all-time leader in victories. He had a 381-91-5 for a career that spanned three years as the head coach at Ironton St. Joseph and 39 at Ironton. His record at St. Joseph was 20-8-1 and 361-83-4 at Ironton.

A 1961 graduate of St. Joseph, Lutz signed with Marshall University and was slated to start the in secondary as a freshman when a knee injury ended his playing career.