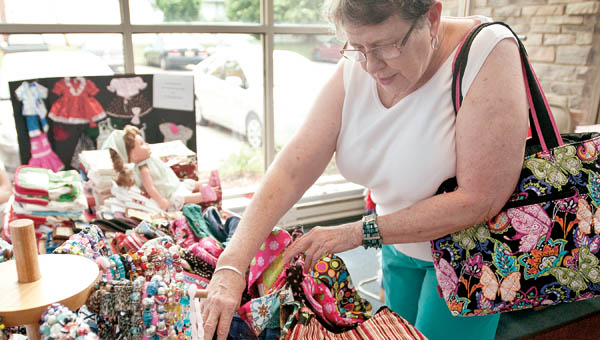 A rainbow palette of watercolors by her side, Pati Payne gently brushed a rosy color onto her canvas.

Sketched in pencil was the form of a woman holding flowers, a hand outstretched to touch the woman’s stomach. The drawing was modeled after a photo Payne had taken of a statue at Osa Wilson’s grave last fall during the annual ghost walk in Woodland Cemetery.

“She died while she was pregnant,” Payne said. “They say if you touch her (the statue’s) belly, it will feel warm.”

Payne paints most of her work based on photographs she has taken and Saturday, she had many of them on display at the inaugural Junefest Arts and Crafts Festival.

Payne and about 20 others vendors had set up shop in the Briggs Lawrence County Public Library for the event hosted by the Friends of the Library.

Crafters displayed their handmade quilts and blankets, doll clothes, jewelry, paintings and stained glass on the second floor of the library.

Victoria Knipp, of Coal Grove, sells her crafts in an online Etsy shop but decided to give Junefest a try for her first craft show.

“It’s been a fun experience getting ready for this,” she said. “Hopefully I’ll get to do more.”

Another first timer to show his work at a craft fair was Ray Pennington of Ironton. Pennington has been a woodcarver since 1998 and a member of the Ashland Area Woodcarvers. Usually setting up a booth at Poage Landing Days in Ashland, the artisan said he wanted try Junefest.

“It’s a good way to meet people and let them know what we do,” Pennington said. “And get some exposure in Ironton.”

“We have some excellent crafters here,” said Patricia Arrington, president of the Friends of the Library.

Arrington said the aim of the event was to raise money for the group to help with projects at the library. Even though Junefest is only in its first year, Arrington said it is likely to return next year, or possibly again this fall.

Friends of the Library is open for new membership, Arrington said. Anyone wanting to join can signup at the library. The group meets the third Wednesday of every other month.