Match Made In Fitness: DeLongs work together to start business 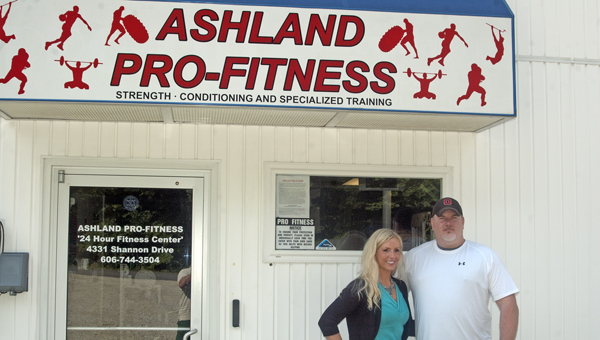 What is really the start of a new fitness center and physical therapy business sounds more like the storyline for a new TV show.

She was a college volleyball player who switched schools to pursue a degree in physical therapy. He was a three-time first team NAIA All-American offensive tackle who won two national titles and was named the nation’s Offensive Lineman of the Year three times.

Since both knew the importance of physical training and staying in shape for their respective sports, they crossed paths and bonded into a friendship that blossomed first into a marriage and now a business that combines a fitness center with a physical therapy practice.

She is Rosa DeLong, physical therapist and former Chatham University volleyball standout. He is Walt DeLong, Georgetown College football star who first made a name as an All-Ohio tackle for the Ironton Fighting Tigers and later began his college career at Ohio State.

Their business is Ashland (Ky.) Pro-Fitness, located on Route 60 just outside the city limits.

“We’re good business partners. Our relationship started with working out. We started off as friends. We would ride bikes together. We would go running together. Well, I would run and Walt would walk,” said Rosa with a laugh.

“We were both athletic. I admired him as an athlete. We had a lot of common interests and that was before I started physical therapy school. I respected him as a person and that helps in a marriage and a business. He’s been my biggest supporter.”

After leading Georgetown to a 41-1 record in three seasons along with a two national titles and a runner-up trophy, Walt was named to the 2000-2010 NAIA All-Decade team two years ago. His playing career taught him a lot about fitness and getting in shape, something he uses to his advantage.

“Everyone says they want to get in shape. They want to get fit. They talk about it and the next thing you know it’s two weeks later and then it’s six months later,” said Walt.

The therapy clinic is located upstairs in the building and the fitness center is located downstairs and is open 24 hours a day, seven days a week for individuals who are at least 21 years old.

There is a weightlifting gym inside along with a room with treadmills and Precor ellipticals. There is also a garage area for training with a 26-foot state-of-the-art Rogue Infinity pull-up rig plus outside training classes.

“I always knew I wanted to start my own physical therapy practice one day,” said Rosa, who began her career working at Ironton Preferred Fitness.

“I told Walt I wanted to make it a therapy gym that was also correlated with a regular gym. That way I can take my patients and progress them in their rehab and then teach them how to continue that wellness program.”

When the couple decided to move forward with their fitness center, Walt turned to his training experiences at Georgetown and put them to use.

“We were looking for a place to do physical therapy and she was going to have a gym on the side. I was just going to help her out,” said Walt.

“My coach at Georgetown was a strongman coach and that’s what we did. We worked out with strongman stuff mixed with cardio. Basically, it was cross-training before it was called cross-training. So I knew a lot of stuff and I was really interested in it. The guy who owned this whole plaza I talked into giving me this garage and I cleaned it up nice and got all this stuff in here.”

Rosa admits that it was Walt’s enthusiasm that helped her make the leap of faith to open the center.

“I don’t know how long it would have taken me to open up my own place without him. I would have put it off a lot longer without him pushing me and encouraging me and helping me along the way,” said Rosa.

“I call him my business partner and he’s also my secretary in a sense. He keeps things together for me, and I do the same for him. We’re a good match. Where he’s lacking I pick up the slack and vice versa. It’s been a good fit so far.”

The center offers two nutritionists, two personal trainers and numerous coaches who do the extreme cross-training, a program that produces great results.

One of the trainers at the center is Chanel Carter who competes professionally as a fitness model. She trains most of her clients with the TRX band that was created by a Navy Seal so that they could train anywhere.

The center’s extreme cross-training expert is Samantha Hartman. She not only works with the physical end of the training but also with proper diet.

Hartman said she began doing the workout more than a year and a half ago herself and realized she was weak. Since then she has seen rapid improvement and now teaches the class.

“Extreme cross-training is scaleable for everybody. It doesn’t matter if you’re overweight or you think you’re old or have a hip replacement. It is safe for everybody going to the gym. I want people to have a healthier lifestyle. We teach them how to eat healthy,” said Hartman.

She said that most people see improvement in themselves within three to four weeks.

“You’re going to see drastic changes. The workouts are very short, anywhere from five to 20 minutes,” said Hartman. “If you eat right and do the workout, you’ll see results. I’ve seen people who have lost hundreds of pounds. Once people see they can lose weight they stick with it. And everyone encourages each other.”

Another trainer is Mike Layne, who ran cross country and track in high school.

Layne — who has been working the extreme cross-training program for the past 14 months — works with new people joining the fitness center.

“We get their forms down and make sure they’re doing things safe. She works with the people who are more adjusted to all the movement and she runs the classes. I kinda bring people up to the level they need to be so we can push them into the class,” said Layne.

Since gym members are of various age, size and fitness status, there are different levels to all the programs the fitness center offers.

“Everything is scaleable. We put the movement to you that will give you a good workout and a good burn,” said Layne.

Walt DeLong said that the type of conditioning or training someone chooses doesn’t matter, as long as they do something.

“You’ve got to set goals and stay consistent. It’s not osmosis. There ain’t nothing out there for that,” said Walt.

With Rosa and Walt DeLong as the stars and a strong supporting cast, it looks like this reality show might be a long-running series.

Filing deadline for candidates is today

MJ Wixsom: Sometimes, sadly, it is time to let go