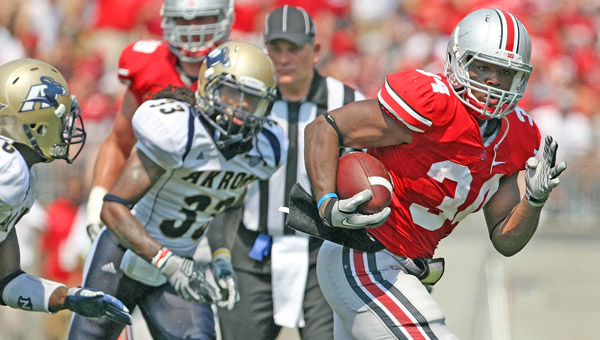 Alleged assault charges against Ohio State suspended running back Carlos Hyde (34) were dropped on Tuesday when the victim decided not to pursue the case. (MCT Direct Photos)

COLUMBUS (AP) — Ohio State running back Carlos Hyde was suspended Tuesday for at least three games and will be required to meet additional obligations before he plays again for the Buckeyes.

Hyde had been suspended indefinitely after he was named a person of interest in an investigation into an alleged assault of a woman at a downtown Columbus bar. But police said earlier Tuesday that the case had been dropped.

Buckeyes coach Urban Meyer then announced Hyde’s punishment “for conduct not representative of this football program or this university.” There was no word in the release on what Meyer meant by the “additional obligations” that Hyde would have to complete before he was allowed to play in another game.

Ohio State opens its fall camp on Sunday. The Buckeyes’ opener is Aug. 31 against Buffalo, followed by another home game against San Diego State and then a trip to California to face the Golden Bears.

Police spokesman Sgt. Rich Weiner said Tuesday that the alleged victim chose not to pursue charges against the Buckeyes’ leading scorer and second-leading rusher a year ago.

“We were in the middle of our investigation,” Weiner said. “The most important thing left to do was interview the (alleged) victim. She met with investigators on Saturday and informed officers that she didn’t want to pursue charges.”

Weiner said the case against Hyde was officially closed.

At the time of Hyde’s suspension — the same day three other Buckeyes were disciplined for off-the-field legal problems — Meyer said: “I have a clear set of core values in place that members of this football program are constantly reminded of and are expected to honor. There are also expectations with regard to behavior. I expect our players to conduct themselves responsibly and appropriately and they will be held accountable for their actions.”

The alleged victim approached police officers early on July 20 and said she was assaulted inside a bar at 303 S. Front St. Police looked into the allegation but Weiner said the case came to an end when she declined to pursue charges.

Besides Hyde, the other players disciplined on July 22 were star cornerback Bradley Roby and freshmen recruits Marcus Baugh, a tight end, and defensive lineman Tim Gardner. Each was involved in a separate incident.

Roby was arrested in Bloomington, Ind., and is facing preliminary charges of misdemeanor battery resulting in bodily injury for making contact with a bar employee. He was prevented by Meyer from representing Ohio State at last week’s Big Ten football meetings in Chicago.

Baugh was removed from all team activities and also will sit out the first game of the season after being arrested for underage possession of alcohol and possessing a fake ID. Gardner, from Indianapolis was sent home and will not be a part of the 2013 team after he was charged by Columbus police with obstruction of official business.

Meyer has faced withering criticism in recent months for not meting out stiff discipline or controlling his players during his previous tenure as coach at Florida. Former New England Patriots tight end Aaron Hernandez, who played for Meyer at Florida, was arrested and charged with murder earlier this year and dozens of Gators players were arrested while Meyer was in charge there.