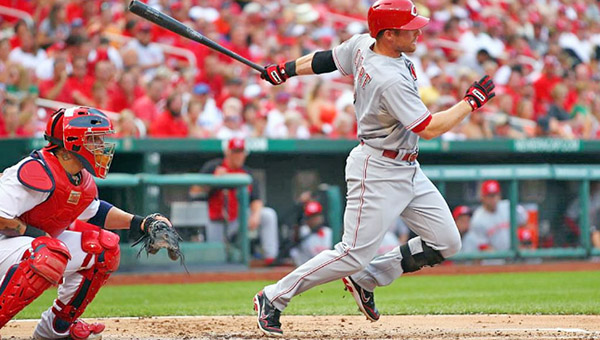 CIncinnati shortstop Zack Cozart triples home Jay Bruce and Devin Mesoraco in the second inning during Monday’s game at St. Louis. Cozart had two hits and three RBIs but the Reds lost to the Cardinals 8-6. (Photo Courtesy of The Cincinnati Reds)

ST. LOUIS (AP) — The Cincinnati Reds were in control for much of the game. Zack Cozart had a solid performance, Todd Frazier came up with a big hit and Mike Leake looked ready to pick up the win.

Then it all fell apart. Just like it usually does when the Reds play the St. Louis Cardinals.

J.J. Hoover gave up Allen Craig’s first career grand slam with two out in the seventh inning, and Cincinnati went on to an 8-6 loss in the opener of an important series on Monday night.

“They got us again,” Reds manager Dusty Baker said. “They had some tough at-bats.”

Cozart had two hits and three RBIs for the Reds, who dropped to 4-9 against St. Louis this season. Jay Bruce hit his 25th homer in the eighth.

Cincinnati has lost its last six series against St. Louis. The Reds’ last series win against the Cardinals was a three-game home sweep from July 13-15, 2012.

“I hate to give up a lead against any team,” Hoover said. “But this one was important.”

Matt Holliday also had a long three-run homer as St. Louis moved into sole possession of first place in the NL Central for the first time since July 29. The Cardinals lead idle Pittsburgh by a half-game and Cincinnati by 3 1/2 games in the top-heavy division.

“I think I’ve developed a pretty good approach that allows me to be successful in that position,” Craig said. “I go up there confident and I believe in myself.”

Rookie Carlos Martinez (1-1) pitched two innings for his first major league win and Edward Mujica worked a perfect ninth for his 35th save.

Cozart and Frazier each hit a two-run triple off Tyler Lyons in the second, helping Cincinnati to a 4-0 lead. But Holliday belted a three-run drive deep to left in the third.

Holliday’s 18th homer came against Mike Leake and traveled an estimated 442 feet for the longest shot by a St. Louis player at Busch Stadium this season.

“What it comes down to is that guys are just swinging the bats,” St. Louis manager Mike Matheny said.

The Cardinals went ahead to stay in the seventh. Jon Jay drove in a run with a bases-loaded grounder off Manny Parra (1-3). Hoover then came in and walked Holliday on a full-count offering and Craig drove the next pitch over the wall in right for his 13th homer.

“I left it a little too much out over the plate,” said Hoover, who has allowed three grand slams this season. “I knew he’s a good hitter with the bases loaded and I didn’t want to come in there on the first pitch.”

“They have a lot of dangerous hitters, but we helped them out with a couple walks,” he added.

Craig improved to 14 for 31 (.452) in his career with the bases loaded. He is batting an eye-popping .452 with runners in scoring position this year, a big reason why he leads St. Louis with 95 RBIs.

“No bigger or better at bat all season,” Matheny said. “He’s been so good in that situation.”

The crowd of 35,159 roared as Craig rounded the bases. The big first baseman then came out for a curtain call.

“I wasn’t thinking about hitting a home run, I just wanted to hit it hard and in play,” Craig said. “When guys are on, I just try and hit it hard somewhere and it usually works out.”

Craig’s drive helped the Cardinals rally from a four-run deficit, tying their largest comeback of the season. They also came from four down to beat Pittsburgh 6-5 in 12 innings on Aug. 15.

Bruce connected against Seth Maness, but that was it for Cincinnati, which lost for the third time in four games.

“We’re getting down to crunch time and every series is important,” Hoover said. “When you look back at the end of the season, one loss could be important.”

Lyons settled down after the rough start and was charged with one earned run in five innings. He struck out a career-high seven and walked two.

“The second inning didn’t go how I wanted it to,” Lyons said. “It was just about bouncing back and trying to keep the team in the game for as long as possible. I think I did that.”

Leake allowed five runs and seven hits in 6 1-3 innings. The right-hander is 1-1 with an unseemly 5.20 ERA in his last six starts.