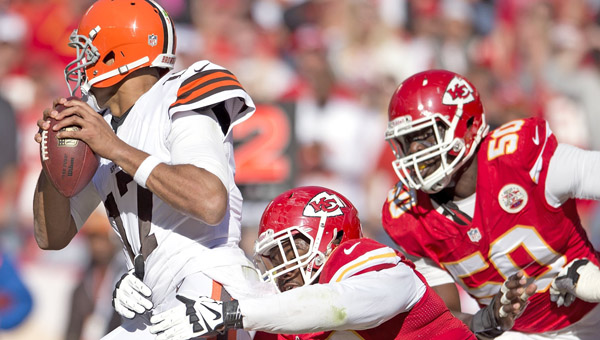 KANSAS CITY, Mo. (AP) — The Cleveland Browns may have settled on a quarterback for the rest of the season.

They’re on the brink of it being too late to matter.

Jason Campbell started in place of the ineffective Brandon Weeden against the Kansas City Chiefs on Sunday, throwing for 293 yards and two touchdowns in a 23-17 loss — one that came down to the final couple of minutes of the game.

“He made some big plays for us,” Browns coach Rob Chudzinski said. “I think his leadership was key in us being able to hang in there and keep fighting after the early deficit.”

After the Browns lost quarterback Brian Hoyer to a season-ending knee injury, they gave Weeden another shot at the starting job. He struggled so mightily last week against Green Bay that Campbell, who hadn’t started in nearly a year, got the nod for Sunday.

He performed well against one of the NFL’s top defenses, too. Campbell continually eluded defenders and kept finding his wide receivers open down the field.

If only they had caught more of them.

The biggest drop came on fourth down with just over 2 minutes left in the game and the Browns (3-5) trailing 20-17. Campbell was flushed from the pocket, threw back across the field and hit Davone Bess right on the hands — only for the ball to bounce incomplete.

The Chiefs tacked on a field goal, and Cleveland’s comeback bid ran out of time.

“We have to start faster, but I’m proud of the way the guys fought,” said Campbell, who’s last start came last season for the Bears. “It’s a game we felt like we had a chance to win. To come away with a loss hurts, but we’ve just got to get back to work.”

Josh Gordon had five catches for 132 yards and a touchdown in what could be his final game for the Browns. They’ve been fielding offers for him ahead of Tuesday’s trade deadline.

“I know just as much as you all know,” Gordon said. “When it happens, if it doesn’t happen, we’ll know at the same time.”

Alex Smith threw for 225 yards and two touchdowns for the Chiefs (8-0), who are off to their best start since winning their first nine games in 2003. Jamaal Charles had 74 yards rushing.

“I mean, not that anybody sneaks up on anybody in this league, but yeah, we’re the only undefeated team,” Smith said. “I think that teams have recognized how we’re playing and no question, they’re coming prepared.”

Early on, it was the Chiefs who looked as if they were better prepared.

They marched downfield on the game’s opening possession before settling for Ryan Succop’s first field goal, and then did the exact same thing when they got the ball back moments later.

Kansas City reached the end zone early in the second quarter when Smith found fullback Anthony Sherman out of the backfield on third-and-10. He picked up a couple of marvelous blocks and rumbled his way 12 yards for his first career touchdown and a 13-0 lead.

Meanwhile, the Browns’ offense struggled to get on track, going three-and-out on their first three series. It took some trickery for Cleveland to score. Campbell handed off to Willis McGahee, who flipped it back to the quarterback. He hit Gordon in stride for a 39-yard reception.

The good vibes on their sideline were short-lived, though.

Charles ripped off two long runs, including one to convert another third down — the Chiefs were 9 of 12 in the half — to get into Cleveland territory. Smith finished the drive by hitting Dexter McCluster down the seam for a 28-yard scoring pass.

The Browns managed to get a field goal to get within 20-10 just before the break, and then carried the momentum into the second half, closing within a field goal on Whittaker’s TD catch.

That was as close as the Chiefs defense would allow them to get.

“The best you can be right now is 8-0 and that’s where we’re at,” Chiefs linebacker Derrick Johnson said. “Everybody’s going to give us their best. We know that. If we can take that punch and keep rolling, that’s what we did today. It wasn’t pretty, but a ‘W’ sure does look good.”