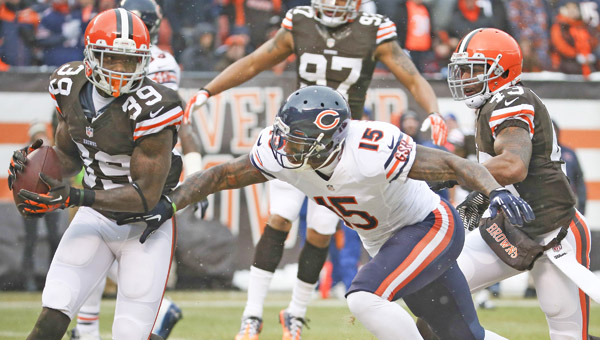 CLEVELAND (AP) — The home finale began with several inches of snow piled up inside the Browns’ stadium. By game’s end, the losses were at familiar depths.

Unable to stop Chicago’s offense at crucial times or protect another late lead, the Browns dropped their fifth straight game, 38-31 on Sunday to the Chicago Bears, who rallied in the second half behind quarterback Jay Cutler and kept the their NFC playoff push rolling forward.

The Browns (4-10) scored two defensive touchdowns and had the lead in the fourth quarter before again crumbling. They’ve lost eight of nine.

It’s the sixth straight double-digit loss season for the Browns, who were 3-2 under first-year coach Rob Chudzinski and actually had playoff potential before falling apart.

“We’ve just got to find a way to finish games,” linebacker D’Qwell Jackson said. “We’ve proven we can create leads. We can dominate when we want to. It’s just we’ve got to learn how to finish games.”

Cutler, who missed Chicago’s previous four games with a sprained left ankle and reclaimed his starting job from Josh McCown earlier this week, threw a 4-yard TD pass to Earl Bennett with 5:41 left as the Bears (8-6) stormed back and temporarily moved ahead of Detroit in the NFC North. The Lions (7-6) play Monday night.

Cutler finished 22 of 31 for 265 yards and validated first-year coach Marc Trestman’s decision to stick with him over McCown, who had played so well while filling in for Chicago’s starter.

Jason Campbell, coming off a career-best game last week in a one-point loss at New England, threw two interceptions and failed to bring the Browns back.

Campbell had hoped to build off last week’s strong game, but the veteran never found a rhythm. He finished 23 of 39 for 273 yards.

“It’s very disappointing,” Campbell said. “Early in the week, I wanted to set the tempo for the guys. Last week was a very emotional loss. It kind of took a lot out of us. We tried to put it behind us. We wanted to come out here and get a win, especially in our last home game. I’m disappointed in myself, to say the least.”

Josh Gordon caught just three passes for 67 yards, a dramatic drop-off for the wide receiver, who racked up 774 yards receiving over his past four games and seemed to break a record with every reception.

Gordon caught a 43-yard TD pass from Campbell with 59 seconds left to bring the Browns within seven. Cleveland, which was beaten by the Patriots because it failed to recover a late onside kick in the closing seconds, tried one of its own but was penalized for an illegal formation.

The Bears ran out the final seconds, ending another dismal home season for the Browns.

Gordon was involved in a minor car accident on Saturday, when his SUV — he was a passenger — swerved off the road in snowy weather. Gordon said the mishap did not affect his performance, but did rattle him.

“Whenever it’s life-threatening, you should be scared,” Gordon said.

The Browns lost star cornerback Joe Haden to a hip pointer in the second half, and with Cleveland’s top defensive back on the sideline, Cutler, who threw two interceptions in the first half, went to work.

After T.J. Ward’s 51-yard fumble return gave Cleveland a 24-17 lead, Cutler drove the Bears 95 yards — with the help of two defensive penalties — and hit Alshon Jeffery with a 45-yard TD pass to tie it with 10:59 left.

Cutler lofted a deep pass toward the front of the end zone to Jeffery, who wasn’t open but hauled in the throw when safety Tashaun Gipson, who returned an interception 44 yards for a touchdown in the first half, badly mistimed his jump.

“It looked like an under-thrown ball,” Gipson said. “I had a good break on it and for some strange reason the ball literally seemed to sail right over my hand. It wasn’t a mistimed jump or anything. But like I said I’ve got to come down with that play. No excuses.”

The Browns, too, are out of reasons for their excessive losing.

Ward, who is eligible for free agency after the season, said it’s time for the Browns to shed their past.

“We have the pieces in place,” he said. “We’ve just got to figure out how to make them all work together.”

NOTES: Gordon is the first Browns player with at least one TD catch in five straight games since Hall of Famer Paul Warfield in 1976. Gordon also extended his single-season team record to 1,467 yards. … The Browns hadn’t scored on a fumble recovery and interception in the same game since the 1989 opener. … Browns rookie Edwin Baker scored on a 2-yard run in his pro debut.

Filing deadline for candidates is today

MJ Wixsom: Sometimes, sadly, it is time to let go