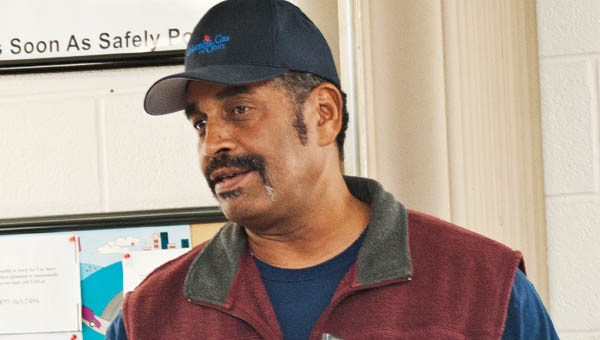 After 45 years of service Casey retired from Columbia Gas.

For 45 years Casey Colvin has gone to work at the Columbia Gas Company.

During those 45 years Colvin worked his way up to a leader position at the company, supervising various operations. However, this past Thursday Colvin was enjoying some cake and camaraderie with his coworkers as he celebrated his retirement.

“He’s going to be hard to replace,” said Kimra Cole, an operations center manager for Columbia Gas. “He has a strong work ethic. He has a strong responsibility to his employees, and to the customers to provide the Ironton area with the best care possible.”

Those who worked under Colvin, echoed Cole’s sentiments about his work ethic and the shoes he left to be filled.

“He was always fair,” said Randy Gilmore, who worked with Colvin for 35 years. “We may not have always agreed over the years, but he’s always stood up for us and been there to go to bat for his employees.”

Gilmore admitted it would be strange coming to work without Colvin and recalled a running joke they often shared with each other.

“He would always tell me I was his conscience,” Gilmore said. “I guess because I would tell him when I thought something was wrong, or I didn’t agree with him. He’d tell me ‘With a conscience like you, I don’t need one of my own.’”

A Vietnam veteran, Colvin is a soft-spoken man who wasn’t really comfortable speaking on his own accomplishments simply saying it felt good to retire.

On top of the cake, the friendly jokes and jabs lobbed at him from his coworkers, Colvin was also presented with a plaque for his dedication and years of service to Columbia Gas.