Latos, Reds allow one hit but lose 1-0 to SD 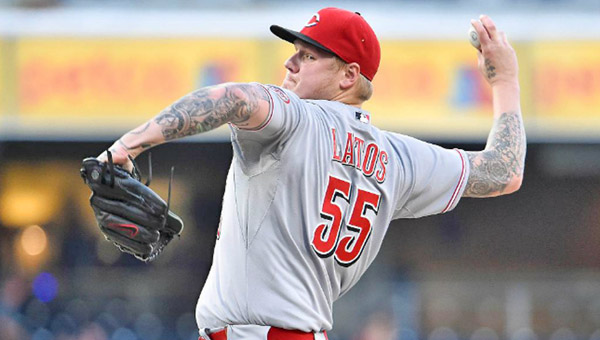 Cincinnati pitcher Mat Latos gave up just one hit but left after seven innings trailing 1-0 at San Deigo on Monday. The Padres held on to blank the Reds 1-0. (Photo Courtesy of The Cincinnati Reds)

SAN DIEGO (AP) — Mat Latos gave up one run, and the San Diego Padres managed just one hit all night.
It all added up to a 1-0 loss for Latos and the Cincinnati Reds on Monday night.
“Can’t really say I was a tough-luck pitcher,” Latos said. “At least I won’t say it.”
Everth Cabrera’s sacrifice fly in the fifth inning scored the game’s only run, as the Padres topped Cincinnati despite getting one hit. Tommy Medica’s single in the second was the only hit for the Padres, who got solid pitching behind rookie Jesse Hahn (4-1) and four relievers to end Cincinnati’s season-high five-game winning streak.
Huston Street pitched the ninth for his 22nd save in as many chances for the Padres, who won for the second time this season after getting just one hit. They defeated Pittsburgh 3-2 on June 4, with Cabrera’s bunt single being the lone hit
Latos (1-1) allowed one run, a hit and a walk over seven innings in absorbing the loss against his former team. He struck out four.
“My job is to put up zeroes and try to win a ballgame and I made one mistake,” Latos said. “I walked the leadoff hitter and it came back to bite me in the butt. So that’s on me.”
The Padres broke the scoreless tie in the fifth without the benefit of hit as Cabrera drove in Medica, who walked to open the inning and then stole the first base of his career. He took third when Cameron Maybin flied to center, then scored on Cabrera’s deep fly to center.
“I throw up all zeroes, maybe we are still playing with a chance to win the game,” Latos said. “Not much I can do. It’s on me. One run will do it.”
It was enough in the series opener as Latos’ effort was wasted.
“He had everything working,” Reds manager Bryan Price said. “He had a great changeup today, a pitch he’s leaning more on this year. He used both sides of the plate extremely well.
“He went seven innings and gave us what will typically work for a victory, but we were just a little short.”
Padres manager Bud Black was impressed with Latos, too.
“We had some funky swings on his slider and his fastball had a little more velocity than in the previous games,” Black said. “And he had a good changeup. It’s deceptive and he was throwing it downhill. With his deceptive delivery, it’s tough to pick up.”
The Reds had the tying run in scoring position in the seventh inning when Devin Mesoraco doubled with one out to left-center. Ryan Ludwick flied out to right, then Carlos Quentin made a sliding catch on his knees on Zack Cozart’s flyball to end the threat.
In the eighth inning, pinch-hitter Skip Schumaker flied deep to center with Maybin making the catch while crashing into the wall.
The Reds loaded the bases with two outs in the second inning when Hahn hit Mesoraco, allowed a single by Ludwick and walked Cozart. But Latos struck out to end the inning.
The Padres had only three baserunners in the game.
But it was the one Latos put there with a walk — Medica — that was his downfall.
“One mental lapse,” he said. “A leadoff walk, in a big ballpark and you saw the result.”
NOTES: The Padres interviewed Logan White for their vacant general manager position. White is the Dodgers’ vice president of amateur scouting. Cubs executive Jason McLeod, an ex-member of the Padres’ front office, removed himself from consideration for the job. … 2B Jedd Gyorko will have his cast removed from his left foot on Tuesday. Gyorko is out with plantar fasciitis. … RHP Andrew Cashner (sore right shoulder) was to meet with the team’s medical staff to determine if he can resume throwing. … Reds 1B Joey Votto continues to play despite his strained left knee compromising him. “He’s certainly not 100 percent,” Price said. “We all know he’s limited.” … Reds Mike Leake (6-6, 3.41) faces Padres RHP Ian Kennedy (5-9, 4.01) on Tuesday night.