Hoyer gets nod as starting QB 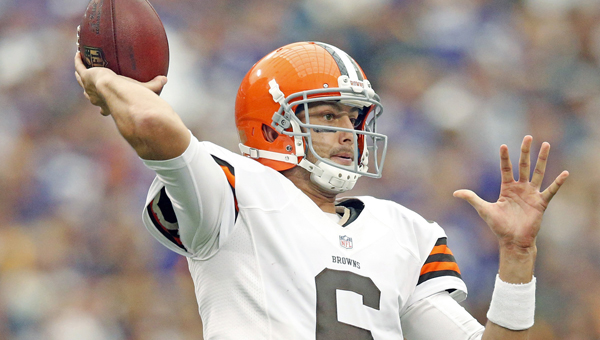 Through sweat and tears, he fought his way back from a serious knee injury only to be faced with the Browns drafting Johnny Manziel, college football’s dynamic quarterback with the cult-like following.

Hoyer, though, persevered. He endured grueling rehab to get back on the field sooner than expected, stayed focused as Manzielmania consumed the Browns, and ignored trade rumors. It will be Hoyer who will lead the Browns, his hometown team, onto the field for the Sept. 7 opener against the archrival Pittsburgh Steelers.

For a Cleveland kid cut by three NFL teams and waiting for his chance, it doesn’t get any better.

“Obviously it’s very special for me,” Hoyer said. “Did I believe this could happen after I got hurt? There was no doubt in my mind, but there were days when rehab (stunk) and I hated what I was doing. It’s amazing how you appreciate the game when it’s taken away from you.”

Needing to fix his offense quickly, first-year Browns coach Mike Pettine chose Hoyer as his starter Wednesday over Manziel, who wasn’t able to do enough during training camp or two preseason games to convince Cleveland’s coaching staff he deserved the job.

“It’s obviously disappointing,” Manziel said. “I feel like if I would have come out and played better it would have been a different outcome. I don’t think I played terrible, but I didn’t do anything to jump off the page. I made strides and got better throughout training camp and that’s what I wanted to do.”

Despite a 40 percent completion percentage, 57.9 rating and seeming to buckle under the pressure this month, Hoyer will start the season. However, in Cleveland that usually only guarantees one game. After all, the Browns have had 20 starting quarterbacks since 1999. Hoyer is the 12th QB to start the opener, a damning indictment toward a franchise that has only made the playoffs once in its expansion era.

The first major decision of Pettine’s coaching career wasn’t easy. He chose Hoyer’s experience over Manziel’s potential and he may have to make another switch. Pettine knows the best plans can change in an instant.

“Give me a crystal ball, and I’ll tell you,” he said when asked if Manziel will play this season. “The NFL season is so long, so much can happen. We don’t want Brian looking over his shoulder thinking one bad throw and I’m out. But over time, if you feel you have to make a change, time will only tell.

“You could foresee a scenario where he doesn’t play this year and there are other scenarios that are absolutely possible as well. It’s hard to tell.”

Pettine brushed aside the notion Hoyer is on a short leash.

“This is Brian’s job,” he said. “I never think of it whether it’s a leash or we want a guy to be a game manager. We want him to be confident and go out and play.”

Pettine’s selection of Hoyer will finally allow the Browns to move on to other things, and there’s plenty of work to be done.

Pettine had targeted the third preseason game as the drop-dead date to pick his starter, but after both Hoyer and Manziel looked so bad in a loss at Washington on Monday, he met with his staff Tuesday night. He informed Hoyer and Manziel of his decision before a team meeting.

Hoyer didn’t have enough time to contact his family, but while he was in the meeting, he received dozens of congratulatory text messages.

Nothing has ever come easy for him and although there was an outside perception Manziel would prevail, the 28-year-old Hoyer wasn’t going down without a fight.

With Manziel on his heels, he can’t relax.

“My entire career’s been looking over my shoulder,” he said. “The pressure you put on yourself is far greater than anything else, because when you’re a rookie undrafted and you’re trying to come in and make a team, there’s no one to look over. You’re just trying to get on the team and to me, I feel like I’ll carry that chip with me forever.”

Manziel temporarily is pushed aside, and that appears to be OK with the 21-year-old, who draws attention with every move he makes on and off the field.

Manziel hopes the hysteria quiets down a little.

“I’m the backup quarterback,” he said. “I shouldn’t be in the spotlight.”

Manziel has no regrets about the way he approached his competition with Hoyer. He was widely criticized for some weekend partying, but the 2012 Heisman Trophy winner insists he wouldn’t change a thing. He’s developing as a player, maturing as a man, and hopes to one day take over.

“Now next time I come into training camp I won’t be surprised by it,” he said. “But I wouldn’t go back from the point after the draft to now and change a single thing. I’m going to continue to live my life and the offseason is the offseason. I’m going to go places, I’m going to do things and that’s going to have no effect.

“Obviously I need to do it in the proper way, but I’m still going to continue to have fun in my life and continue to live my life.”

For now, as a backup.

NOTES: Browns DE Desmond Bryant underwent wrist surgery. Pettine doesn’t know yet if Bryant, limited to 12 games last season by a heart problem, will be back for the opener.