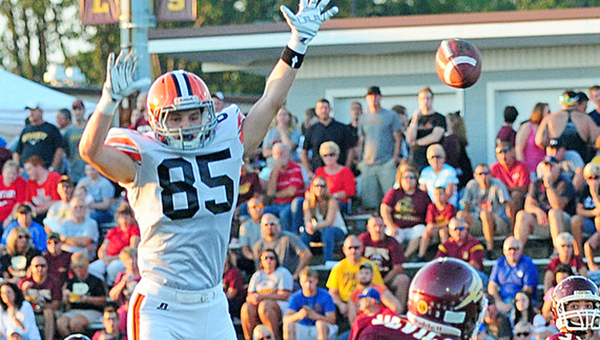 A familiar face is trying to bring back familiar results for the Amanda Clearcreek Aces.

After back-to-back playoff appearances in 2010 and 2011, the Aces had back-to-back 3-7 records the past two seasons.

Scott Hinton is the Aces’ first-year head coach, but he is more than familiar with the program.

Hinton was on special teams when Amanda won the 1999 Division V state championship and was the starting quarterback when they repeated as state champs the following year.

Hinton — the nephew of former head coach and all-time wins leader Ron Hinton — has guided the team to wins in their first two games this season. He’ll be looking to make it No. 3 on Friday when the Aces host the Ironton Fighting Tigers at a special 7 p.m. kickoff.

“They’re a lot like us. They’re enrollment has declined over the years and they play a tough schedule against bigger schools and sometimes you’re going to hit a lull,” said Ironton coach Mark Vass whose team is 1-1 on the year.

“They seem to be back on track. They’ve won both their games pretty easily and they have a nice team with a lot of returning players and a really nice group of skill players.”

The Aces feature junior running back Jordan Leasure. The 6-foot-1, 195-pound Leasure has carried the ball 38 times for 336 yards and he’s scored seven touchdowns, one on an interception return.

Leasure ran 21 times for 164 yards and three touchdowns in a 42-0 rout of Hebron Lakewood in the season opener and followed that with 172 yards on 17 tries and three scores as the Ace blanked Zane Trace 30-0 last week.

The Aces’ defense has proven to be as stingy as the offense is potent as evidence by two straight shutouts.

“They’ve got a nice defense. It’s going to be a challenge for us to try and move the ball, especially on the ground,” said Vass.

In the 42-0 win over Lakewood, Amanda allowed just 53 yards rushing and 102 total yards. The Aces virtually duplicated that performance against Zane Trace as they held the Pioneers to 101 total yards including a mere 60 yards on the ground.

The defense has Smith at nose guard with Lumbard and Kelley the tackles. Sophomore Maxx Wolfe (5-10, 165) and Crodle are the ends with Genders and senior Elias Conkel (6-0, 195) the linebackers.

In the secondary are Iles and junior Landon Roberts (5-11, 170) at the corners with Melucci and Leasure the safeties.