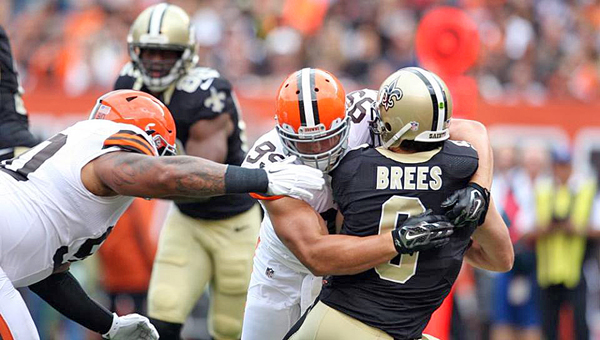 CLEVELAND (AP) — Mike Pettine received a Gatorade bath and looked forward to smoking a cigar. Brian Hoyer wanted to hold onto the feeling as long as possible.

Seemingly cursed for so long, the Browns finally have something in September to celebrate.

Hoyer, annoyed that he had to come off the field for rookie backup Johnny Manziel, directed an 85-yard drive to set up Billy Cundiff’s 29-yard field goal with three seconds left, giving Cleveland a 26-24 win over the New Orleans Saints on Sunday.

Cundiff’s kick helped the Browns (1-1) snap a nine-game losing streak in home openers, gave Pettine his first NFL coaching win and Cleveland its first in a home opener since 2004 .

“I graduated high school that year,” Hoyer said. “It’s a long time coming, and our fans deserve it.”

Manziel made a perfunctory NFL debut with a handful of plays, but had no major impact. The Browns didn’t need any magic from Johnny Football.

He was marvelous in the clutch, moving the Browns from their own 4 to the New Orleans 11, and Cundiff took it from there. Hoyer completed several big passes on the final drive, including one on fourth down to tight end Gary Barnidge and a 28-yarder to Andrew Hawkins with 13 seconds to go.

“The play of the game was Gary catching the ball across the middle on the last drive,” Hoyer said. “If he doesn’t do that, it’s over.”

Down 24-23, Hoyer took over in the shadow of his own end zone. Missing suspended wide receiver Josh Gordon and without injured Pro Bowl tight end Jordan Cameron and running back Ben Tate, Hoyer marched the Browns down the field.

He completed two passes on third down and kept the drive alive by firing his 10-yard strike to Barnidge. With 15 seconds remaining, Hawkins somehow got behind the defense and Hoyer lobbed him the ball.

Out came Cundiff, who drilled his kick to the delight of Browns fans, who seconds earlier feared they would witness another heart-breaker.

Pettine was presented with a game ball by Hoyer and got a handshake from legendary Browns running back Jim Brown.

“I couldn’t be more proud,” said Pettine, who lost his debut last week in Pittsburgh. “There were a lot of times during that game we could have just let it slip away and we battled back. This game’s about making plays.”

Hoyer went 8 of 11 for 78 yards on the last drive and finished 24 of 40 for 204 yards and a TD. He came out for a few plays as Manziel, the hyped rookie, handed the ball off twice and had one incompletion.

Hoyer wasn’t thrilled about sharing the stage with Manziel.

Safety Tashaun Gipson returned an interception 62 yards for a TD in the second quarter and Karlos Dansby had an overlooked sack in the fourth for the Browns.

After a terrible start, Brees got into a groove and had the Saints in position to bounce back from a tough overtime loss last week in Atlanta. But New Orleans defense couldn’t stop the Browns late and coordinator Rob Ryan and coach Sean Payton had a heated discussion on the sideline in the fourth quarter.

It was a milestone day for Brees, who jumped Hall of Famer John Elway into fourth place in career yardage. Brees went by Elway on a six-yard completion in the second quarter to Graham, who didn’t make his first catch until deep into the second quarter.

Brees was under duress throughout the first half as Cleveland’s defensive front harassed him. On the pick, Paul Kruger hit Brees just as he released the ball, sailing it over Graham and right to Gipson, who picked up some blockers and scored untouched.

For a change, the ball bounced Cleveland’s way.

“It’s good to finally end up on the other side,” cornerback Joe Haden said.

NOTES: Browns rookie CB Justin Gilbert was treated for a head injury in the second half, but returned. … West (68) and RB Isaiah Crowell (54) combined for 122 yards and one TD. … The Browns are just 2-14 in home openers since 1999. … Cleveland hosts Baltimore next week.