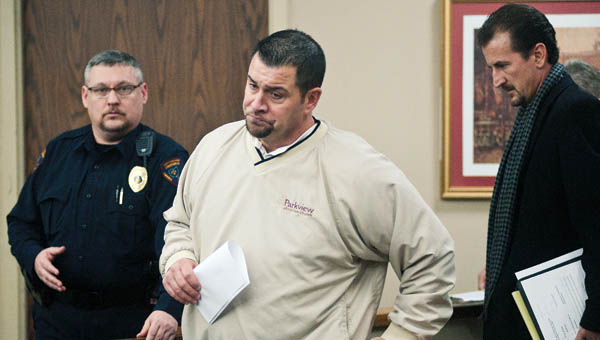 All Seasons owner sentenced to 3 years

A failed business owner or a scheming contractor?

Talk to one of the dozens of people left high and dry after paying for repair services for their homes and they’ll tell you Patrick Richard is the latter of the two.

Ridgeway’s South 11th Street home was damaged in a windstorm that swept thought the area in 2012. His roof was damaged, his fence torn down and a tree was knocked down in his yard.

“They got $1,000 from me and never did a thing,” Ridgeway said. “Never saw them. Was never contacted. They did zero.”

Ridgeway, as well as a few other victims of the All Seasons of Kentucky scam, sat in the courtroom for Richard’s sentencing on Wednesday.

Leona Rigsby, who lives off State Route 243 in Deering, also attended the hearing. She still hasn’t been able to get her home fixed since All Seasons took the $5,261 her insurance company gave her for a new roof. And now, more problems have arisen as a result, she said.

“Because State Farm came with them on the day they said we were entitled to a new roof, that gave credibility to this company,” Rigsby said. “And I really didn’t question them at that point. … “As a result now I have ceilings that don’t look like ceilings.”

Rigsby brought to court photos of the damages in her home. Ceiling tiles cracked and water-damaged, mold forming, all because her roof was never repaired.

“What could have been considered minor at one time, which wasn’t minor, but compared to what it is now, has turned into major,” Rigsby said.

Richard’s attorney, Chris Delawder, recommended the man be sentenced to a term of probation so he could continue to pay restitution to the 35 victims in the case.

Richard and his attorney said he never had any intentions of taking homeowners’ money without performing the services requested. He said the business simply failed.

“Our intentions for coming here were to run a successful operation, which we did for a very short period of time,” Richard said. “My intentions were to assist the operation in St. Louis. That’s the only reason I even came here.”

Richard referred to another contracting business, All Seasons Contracting Inc., which he said was failing.

Then, when the Ironton business started to fail, word spread to customers, Richard said.

“I started losing key employees. I had a little bit of employee dishonesty and customers started falling off when word started to spread that we were having problems,” he said.

Richard claimed his company was owed between $50,000-$60,000 for work that was completed, but people never paid.

“My intentions, when things completely fell apart, was to use that money to return back to homeowners, which we tried to do in the very beginning,” Richard said. “I made some effort at that time to make people whole.”

“I really feel like that man intentionally set out to do what he did and didn’t think he would get caught,” she said.

Investigators didn’t buy it either. As a result, Richard and his wife, Carol, were indicted on more than 100 criminal acts in November 2013 following a months-long investigation by the Ironton Police Department and Ohio Attorney General’s Office into allegations the company was paid for home repair services but did not perform any or all of the work they were hired to do.

Carol Richard was sentenced in October to four years community control sanctions after pleading guilty to a count of third-degree attempted engaging in a pattern of corrupt activity. She was also ordered jointly to pay restitution.

“Mr. Richard had a failed business that went terribly wrong in Missouri,” Cosgrove said. “He took advantage of people’s bad luck and misfortune in Ironton to dig himself out of it. It wasn’t until this criminal case came along that we’ve seen any type of what you could consider remorse. … He has harmed a lot of people.”

Judge D. Scott Bowling sentenced Richard to three years in prison but extended his incarceration date to Feb. 6 in order for him to make additional restitution payments.

Delawder said his client expects to be able to pay about $20,000 more before he is sent to prison.

As for the victims, the restitution will be distributed in proportion to each individual’s loss.

Rigsby said it won’t be enough to cover the cost of her repairs, but she is glad Richard has lost his credibility as a contractor and business owner.

Ridgeway was satisfied with the prison sentence.

“I’m very satisfied and I feel like they got what they deserved. They hurt a lot more people than me and they got people a lot worse,” he said.

Ironton Police Detective Joe Ross, who investigated the case since the beginning, said he was pleased with the prison sentence and restitution order, but that the case still wasn’t over for him.

“It will be over when everyone gets their money back,” Ross said.

The Ohio Attorney General’s Office also filed a civil lawsuit against All Seasons of Kentucky and the Richards in September 2013. The lawsuit, which was filed in the Lawrence County Court of Common Pleas, concluded with a default judgment in July 2014. The defendants were ordered to pay $169,004 in consumer restitution and $75,000 in civil penalties.

Shields Roofing and Construction, of South Point, also filed a lawsuit in June of 2013, which concluded in August of this year with a judgment of $43,241 awarded to the plaintiff for unpaid services.