Little pellets have lots of uses

Waiting on what Mother Nature will do next 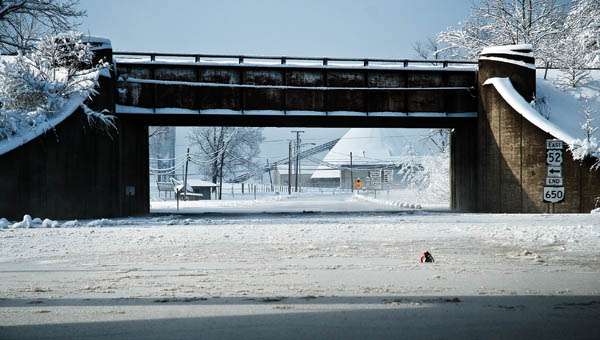 First it was too much rain. Then came too much snow. Now put those two together with warmer temperatures and you get a weekend that has meant flooding and more flooding.

“The ground is already saturated and with high levels in the creeks and tributaries, the snow melts and that further saturates the ground with water,” said Kathleen Fuller, public information officer for Ohio Department of Transportation,District 9. “We may see additional closures so we are checking the routes.”

Since Wednesday when they came to work at 7 a.m. ODOT’s Lawrence County crews have been going non-stop, first on flood watch, then on snow removal. The goal was to get all the state routes cleared of ice and snow on Friday, leaving the crews to check on those routes typically prone to flood over the weekend.

“The sun will really help to activate the salt in the next few days,” Fuller said.

Now crews are on watch for water over roadways.

“We are mobilizing crews and getting out there as quickly as possible,” Fuller said. “Over the next few days we will have roads closed with barricades. We will be watching for routes that are not closed now but are prone to flooding.”

“We had so much rain leading up to this that is causing some trees to come down,” she said. “We have a lot of issues with them coming down randomly.”

The weight of snow has brought down limbs, while the high concentration of water in the ground is uprooting smaller trees.

That is making travel by the county EMS crews challenging.

“It was a pretty bad night the night before last,” Buddy Fry, director of the EMS, said on Friday. “We used several fire departments to help get to our patients. They’ve been really cooperative. We would get up so far on a county road or hill, and not make it up the rest of the way. The fire departments would bring ATVs and four-wheel drive units to get to the patients and bring them to the ambulances.”

Also putting motorists in danger is a rash of thefts of high water signs and barricades throughout the county.

As of Friday afternoon at least 10 signs and/or barricades put out by county road crews had been stolen, according to Lawrence County Engineer Doug Cade.

“They’ve put Hog Run Road up three times and it’s been stolen,” Lawrence County Sheriff Jeff Lawless said. “It causes a danger if everyone is not familiar with the road.”

Anyone with information on the thefts is asked to contact the sheriff’s office at 740-532-3525.

The thefts could be punishable by up to six months in the county jail, Lawless said.

Some of the flooding is caused by drainage pipes plugged up with leaves and other debris from the fall. State crews can clean those out, sending the water back off the roads. However, when the high water comes from swollen creeks and tributaries plus melting snow, it’s a case of letting nature take its course.

“If it is a slow melt, the ground has time to soak it up,” Fuller said. “It may not be so bad. We’re watching, waiting and seeing.”