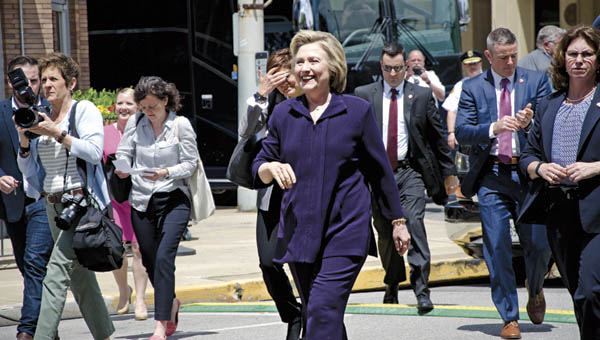 Democratic presidential candidate Hillary Clinton walks up 15th Street in Ashland to meet with supporters prior to her roundtable discussion on jobs at Alma’s Italian Restaurant on Monday.

ASHLAND, Ky. — Democratic frontrunner Hillary Clinton made her first stop in the Tri-State as part of her 2016 presidential campaign on Monday.

The former first lady, U.S. senator and U.S. secretary of state met with AK Steel workers and union representatives for a roundtable discussion on jobs and manufacturing at Alma’s Italian Restaurant in Ashland.

The visit, which came in advance of the May 10 and May 17 Democratic primaries in West Virginia and Kentucky, is part of what the campaign calls an “Appalachian Listening Tour,” in which the candidate and her husband, former President Bill Clinton, are making multiple stops throughout the two states.

Workers at the plant, which has been hard hit by layoffs in recent years, met with Clinton for the invitation-only event. The audio was broadcast outside and outlined her goals to bring back manufacturing jobs. She also took questions from the group.

On 15th Street, a large crowd of a few hundred supporters gathered along the police barricade, hoping to catch a glimpse of the candidate when she entered the restaurant.

As they waited, they were joined by a small, but vocal group, of protesters, on the other side of the street, who chanted slogans, such as “Go Home, Hillary!” and “Trump rules!”

Clinton’s supporters began chanting the candidate’s name back, hoping to drown out the opposition.

As the two sides exchanged words, Clinton’s motorcade arrived at the restaurant.

To many in the crowd’s surprise, she held off entering the restaurant and walked up the street to the barricades, where she spent about 10 minutes shaking hands, signing autographs, posing for photos and speaking with supporters and a few protesters.

One her supporters was Adam Abt, of Coal Grove, who was there with Jamie Callahan, of Ashland.

“I’ve supported her repeatedly, Abt said. “We’ve supported Hillary and her whole idea of breaking down barriers within the state.”

Apt pointed out the location of the event, across the street from federal courthouse in Ashland.

“What an appropriate backdrop,” he said, referring to the protests against Rowan County Clerk Kim Davis last summer, when she appeared in court after her refusal to follow the U.S. Supreme Court’s ruling legalizing same sex marriage across the nation.

Among the protesters was Adam Clark, of Ashland, who works for Natural Resources Partners, an energy company dealing in oil, gas and coal.

Clark held a sign that asked, “Mrs. Clinton, why do you hate my industry?”

Unlike Clinton’s other opponents, Clark chose to hold his sign on the same side of the street as her supporters, and ended up having a brief interaction with the candidate when she passed by.

“She told me that she didn’t hate me,” Clark said. “I know she doesn’t hate me personally, though.”

Clinton has drawn fire from the coal industry, who has seized on a soundbite from an Ohio speech earlier this year, in which she said “We’re going to put a lot of coal companies and coal miners out of business.”

Her campaign was quick at the time, to clarify that the remark came as part of a call to invest in a clean energy economy, and a pledge “to make it clear that we don’t want to forget” those who lose work in the coal industry as a result of changing energy markets.

Clark, however, says renewables, such as windmills, can not produce enough power to match a coal-fired plant.

Clinton was due to make a stop in Williamson, West Virginia, later in the day. On Tuesday, she will host a forum on the opioid epidemic at the University of Charleston.

Her visit to Appalachia was preceded by Bill Clinton, who made stops in Logan and Charleston, West Virginia, on Sunday, as the former first couple attempted to engage a region that has trended Republican in recent years.

The former president spoke at a high school in Logan, where, during his speech, he faced off with a few hecklers from the coal industry mixed into the crowd of supporters. His visit to Charleston, however, was a friendly crowd, and he spoke of the economic impoverishment of the region and the need to do more on the opiate epidemic.

Clinton’s Ashland stop was her first in the Tri-State for the 2016 campaign. Her Democratic opponent, U.S. Sen. Bernie Sanders of Vermont, hosted a rally at the Big Sandy Superstore Arena in Huntington this past Tuesday.

On the Republican side, the party’s frontrunner, real estate tycoon and reality TV star Donald Trump has announced that he will visit West Virginia, though specific details have not been released.

Kentucky’s Republicans and both parties in Ohio have already held their primaries.

Ohio is expected to be a battleground state in the fall campaign. Recent polling shows Clinton with a slight lead over Trump in the Buckeye State.

Public Policy Polling released the results of a survey on Monday that showed Clinton leading Trump, 45 to 42 percent. Trump last held a lead in the state in February, when the Quinnipiac poll found him leading Clinton, 44 to 42.