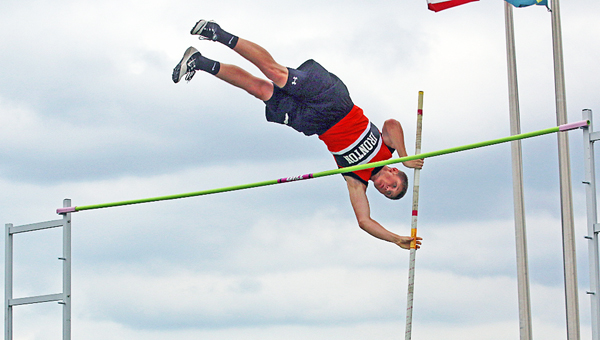 ATHENS — It was a tough day in a meet filled with tough competition.

In what seemed more like a state meet, qualifiers were few in the Division II regional track meet’s first day Thursday at Athens High School.

The South Point Pointers’ 4×100-meter relay team of seniors Trent and Trey Patterson and Stephen Wagoner and freshman Owen Chafin finished third in the qualifying heat with a time of 44.55.

The foursome will run Saturday in the finals. The top four finishers in the finals of each event advance to the state meet next week at Jesse Owens’ Memorial Stadium on the campus of Ohio State University.

Trent Patterson also qualified for the finals in the 200-meter dash. He ran a 23.66 to place third.

There were eight seniors among the 16-man field and six finished in the top eight.

Fairland’s Drake Cox and Jonah Galloway — both juniors — also ran into tough competition in the discus. Cox was 11th with a toss of 134-5 and Galloway was 15th at 133-2.

The top throw was 180-5 by Mason Pilkey of Warren. There were seven seniors among the top eight finishers.

The Lady Dragons’ freshman Allie Marshall cleared 5-1 in the high jump and placed sixth. Maria Boldoser of Logan Elm — another freshman — went 5-5 to win the event in a field that had just four seniors and only two in the top seven.

The Lady Dragons’ 4×200 relay team of Melia Tubbs, Erin Hayden, Karli Fuller and Marshall was 15th and the quartet of freshman posted a 1:54.93 time.