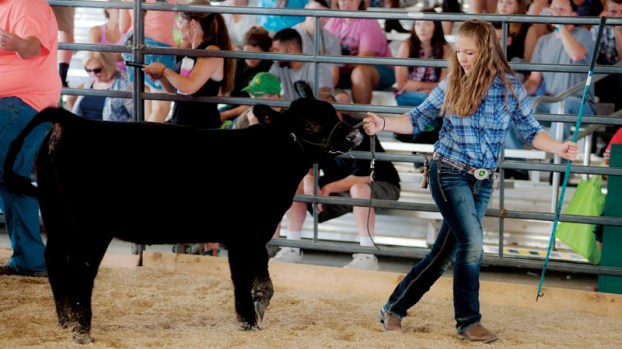 ROME TOWNSHIP — Young farmers took their cattle to the arena of the Lawrence County Fair again on Thursday, this time to take part in the market beef show.

For the winners, it was the culmination of a lot of hard work raising the animals.

“All the winning is done at home,” Maddy Calloway, 15, of Symmes Valley, said.

She had multiple wins at the show, coming in as the grand champion for market feed steer, and market feeder calf, and the reserve champion and senior showman for beef breeding.

The previous day, she came in fifth in the final drive in the market steer show. She has been raising cattle for two years.

“Amazing,” she said, when asked how she felt about winning.

Another winner who did well on both days was Marky Norris, 18, of Symmes Valley.

Already a veteran farmer with nine years of experience, he was the reserve champion in Wednesday’s market steer show and, on Thursday, he was named the grand champion in beef breeding and market feeder heifer.

Teddilyn Craft, 13, of Symmes Valley is in her fourth year of raising cattle. She took home the title of reserve champion in both the market feed steer and market feeder calf categories.

“It feels great,” she said.