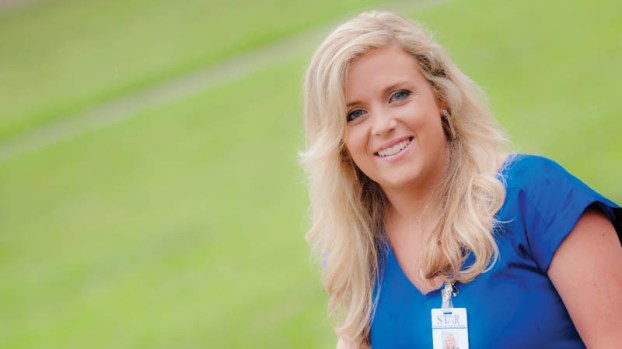 Woman turned tragedy into way of helping others

On Sunday, Feb. 18, 2007, just 25 days after two Ironton Middle School students were killed by a train near the McPherson Street emergency exit to U.S. Route 52, another tragedy occurred less than a quarter-mile away.

The previous evening at approximately 9 p.m., 83-year-old Thelma Jane Mooney heard somebody knocking on the front door of her Thomas Street home. Thelma lost her husband of 69 years, Ironton businessman Eugene Mooney, just six months prior and was still acclimating herself to living alone. The noise scared her, so she called her son, Dan Mooney, who lived two houses away.

Dan and his then 17-year-old daughter, Lindsey Mooney Redoutey, walked to Thelma’s house to ensure she was safe.

“She was nervous,” Lindsey recalled, noting her grandmother had a habit of crumpling paper in her hand when she felt anxious, a habit Lindsey continues to this day. Once Thelma appeared consoled, Lindsey found an old slapjack (a self-defense weapon) and told her grandmother she was leaving it by the front door. “She looked at me like I was speaking words of gold.”

Concerned, Lindsey suggested she spend the night with Thelma.

“I begged her, because she was scared,” Lindsey said. “She hesitated, which is something I still hold onto.”

Thelma ultimately insisted she was fine. As Dan and Lindsey left, Thelma instantly shut and locked the door. Lindsey found this odd. Her grandmother typically waited until her loved ones were strolling the sidewalk to shut her front door.

“I had this horrible feeling go through me,” she remembered. She woke her parents and told them she was going to check on her grandmother. Her parents talked to her for a while and calmed her down. She went back to bed, but couldn’t sleep for several hours.

At approximately 10:15 a.m., a neighbor called. Lindsey answered the phone. Her grandmother’s front porch light was still on, the newspaper hadn’t been taken in, and the overhead door on her attached garage was open. Lindsey ran to Thelma’s house thinking she might have fallen and hurt herself. The front door was locked, so she ran up the driveway into the garage. The overhead door was indeed open, but the door leading from the garage to the kitchen was locked.

“I was pounding on the door, screaming,” she recalled. There was no answer.

Next, she ran back down the driveway and saw her mother, Sue Mooney, heading her way.

“I yelled and told her to get a neighbor, Richard Thompson, to knock the front door down.”

Then she ran to the back yard and jumped the chain-link fence into a few feet of untouched snow. Her grandmother’s sliding glass back door was open. Curtains, waving in the wind, covered the entrance.

“I saw footprints from the back door to the fence,” Lindsey tearfully recalled. “There were drops of blood. I feared for my life a little, thinking somebody might be in there. Something told me not to open that curtain.”

But she did it anyway.

Just inside the open door, Lindsey’s grandmother was lying at her feet. Authorities would eventually confirm to the family that Thelma endured several broken ribs and a broken jaw. Her throat was sliced multiple times. Blood covered the room.

“I was paralyzed,” she said. “I felt like I was sinking into the earth.” Moments later, she heard Sue calling from outside the fence. “I was able to get enough out to say, ‘Mom, don’t let Dad come in here.’ I didn’t want him to see Grandma like that.”

Upon regaining enough strength to walk outside and climb back over the fence, with help from her mom, Lindsey remembered walking to the front of the house and seeing Thompson breaking down the kitchen door to the garage.

“Things were broken all over the place,” Lindsey recalled. “Blood was everywhere. It looked like a horror movie — much worse than people thought.”

Nine years later, recalling the events of Feb. 18, 2007, is still a struggle for Lindsey. For several years, she was too traumatized to sleep when it was dark outside.

“I worried something would happen to someone else I love,” she said. Counselors and psychiatrists entered the picture to help the then-teenager come to terms with her devastating reality. She was diagnosed with Post-Traumatic Stress Disorder (PTSD), depression and anxiety.

She found an outlet educating herself about the effects of trauma, eventually earning a bachelor’s degree in psychology and then a master’s degree in clinical mental health with emphasis on PTSD.

“Unless you’ve experienced PTSD, you don’t know what it’s like,” she said. “You see it, you smell it. You hear it. It’s like a tape that plays over and over in your brain. A textbook can’t help you understand that or the co-occurring problems that follow.”

To overcome night terrors, including vivid dreams of her grandmother blaming her for the yet-to-be-solved murder, Lindsey jumped out of bed, put pen to paper and wrote her pain into a journal. Eventually, she had a dream that provided some closure.

“My grandma came to me and she was healed. There were no marks on her. Her clothes were all clean. She didn’t blame me. I said, ‘Grandma, do you know you died?’ She smiled, walked me to the front door, gave me a kiss, and left.”

That was five years ago. Lindsey hasn’t had a nightmare since.

Her grandmother’s unsolved murder was re-opened a few months ago, which also re-opened a wound for the entire Mooney family. Lindsey’s brother, Jason, was the prime suspect in the initial investigation, but was cleared by DNA evidence. However, the social toll of Jason being suspected created yet another wound for an already broken family.

“We are fortunate they have re-opened the case,” Lindsey said. “We hope they will find answers.”

Lindsey spoke of the cruelty her brother’s young children endured at school despite the fact he was officially cleared of any wrongdoing. She noted she and her husband, John, endured two miscarriages before finally giving birth to their now 2-year-old daughter.

Her life experiences, and resultant education, led Lindsey to STAR Community Justice Center in 2014, where she presently serves as a reentry specialist assisting many people who have experienced tragedy of their own, yet chose drugs to cope and were ultimately incarcerated. Her job is to give these residents hope upon returning to society by knocking down obstacles they previously viewed as impenetrable walls.

“I hold onto happiness, because I know what real pain feels like,” she said. “I don’t want anybody to feel what I felt. If they do, I need to help them.”

Anybody who knows Lindsey knows this statement is true. Gregarious, energetic, and engaging, she appears to people who don’t know her history as a carefree soul without a worry in the world.

But, the truth is she has endured more than many of us could handle. She was forced, at a young age, to teach herself how to deal with her emotions and overcome treacherous hurdles.

“Our only choice is to move forward,” she said. “God has been with me the entire time.”

Today, she draws upon the hurdles she’s cleared to show others anything is possible.