Meyer happy, not happy so far 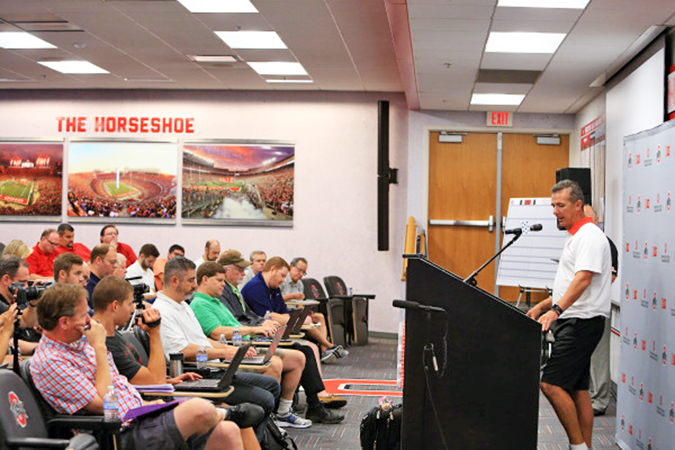 COLUMBUS – With Ohio State a week into preseason training camp, Urban Meyer had mostly good news with a little disappointing news mixed in when he took the podium at OSU’s football media day on Sunday.

“I’m very pleased with our first week. However, this is where it gets real,” Meyer said, looking ahead to the second week of practice after the first two-a-day session on Friday and an intrasquad scrimmage on Saturday.

“I was pleased with the scrimmage and I usually don’t say that on the first one,” he said.

But Meyer did not single out any players for playing particularly well and said he still thinks the Buckeyes look “very average.”

“This week will determine if we’ll be any good,” he said. OSU has nine practices scheduled in the next six days.

The disappointing news came when he gave an injury report and said two players had suffered significant injuries.

Redshirt sophomore defensive end Darius Slade will miss the season because of a ruptured Achilles’ tendon and offensive tackle Malcolm Pridgeon, a junior college transfer, will be out three months because of a knee injury that required surgery.

Neither player was expected to start but losing them for all or most of the season could take away from OSU’s depth on the defensive and offensive lines.

Some other thoughts from Meyer and some of the Buckeyes on media day:

• GOING SLOW WITH BOSA: Freshman defensive end Nick Bosa has made a faster than usual recovery from anterior cruciate ligament surgery halfway through his senior season of high school at Fort Lauderdale (Fla.) St. Thomas Aquinas High School, but Meyer said he is being careful with the 5-star recruit

“We are being very patient with him,” Meyer said about the younger brother of NFL first-round draft choice Joey Bosa. “He hasn’t been in a full scrimmage situation yet. We’re making sure that knee is 100 percent sound, which it is.

“We’re just easing him in. He comes from an excellent high school program, he’s very well coached. He will be game ready.”

• YOUNG AND HUNGRY: Defensive end Sam Hubbard, a sophomore in his first year as a starter, said the competition for starting spots has made the Buckeyes a very hungry team.

“We have a young, hungry team that is going hard. The coaches say we’re real coachable,” he said. “Young guys are hungry to make a name for themselves.”

“Pressure is something you feel when you’re not prepared,” he said.

Barrett feels better prepared this season than he was a year ago because he is not sharing practice time with Cardale Jones.

He said he misses Jones personally. “I do miss him because our (quarterback meeting) room is not as lively,” Barrett said.

But he does not miss splitting practice time as the No. 1 quarterback. “Last year I didn’t have enough reps (practice repetitions). I can still improve, I’m not saying I’ve made it. But I like where I am as far as fundamentals this year,” Barrett said.

• WILSON’S ROLE: Three years ago when Dontre Wilson arrived at Ohio State he was regarded as a player who could do the same sort of things Percy Harvin did in Meyer’s offense at Florida.

It hasn’t turned out that way so far unless things change this fall in his senior season. He is, at best, the No. 3 running back behind Mike Weber and Curtis Samuel.

Wilson’s biggest role this season might be as a punt returner. “We’re still watching (freshman) Demario McCall – a pretty talented guy – and it hasn’t been finalized yet. But right now, if we played today, it would be Dontre,” Meyer said.

• UC IN BIG 12 OK WITH MEYER: When Meyer was asked for his thoughts on Cincinnati possibly being invited to join the Big 12, which would give OSU an in-state competitor from a Power Five conference, he pointed out he was a graduate of UC and played for the Bearcats.

“I think they should be in the Big 12. My sister is the provost there, so I know that school very well and couldn’t be happier for that city and for that school if they do get into the Big 12,” he said.

If Meyer does not add anyone during the season or after the season, that would be the smallest number of captains he has had at Ohio State. The previous low is five and there were six last season.