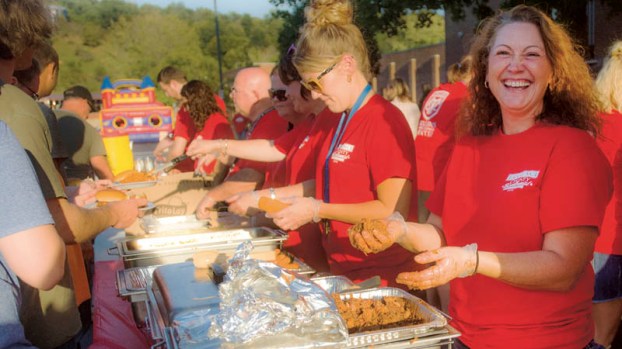 Emily Mays serves up the BBQ during the annual hog roast on Thursday at Collins Career and Technical Center.

GETAWAY — Collins Career and Technical Center hosted an event Thursday that is an annual tradition for the school.

A hog roast took place at the main campus, featuring food, games, music and inflatables, in an effort to draw the public to the school.

“Every year, we do this,” Superintendent Steve Dodgion said. “It gives people a chance to come see the facility.”

He said, for this year’s event, which drew a few hundred people, the school organized in conjunction with Lawrence County’s bicentennial celebration.

Displays were set up on the grounds, featuring historic photographs of Lawrence County schools since 1816.

Dodgion said the school hosted a celebration for the state’s 200th anniversary in 2003, featuring a bicentennial bell.

He said the hog roast was good way for the school to get more into the community.

“A lot of people have never seen this campus,” he said. “A lot of things happen here, and we’re doing some of the most exciting things in education with our STEM school.”

Music for the event was provided by Sheldon Road, a band based in Wheelersburg, comprised of members from throughout the local area. The group has been playing in their current incarnation for about a year, drummer Bob Anders said, and they performed covers such as Tom Petty’s “Free Fallin’,” Don Henley’s “Dirty Laundry” and U2’s “With or Without You” for the crowd.

The school has more events planned for the public, Dodgion said. A chili cook-off is scheduled for 11:30 a.m. Thursday at the main campus, in which students and faculty will prepare the food for the community.

Following that, a Buddy Walk, to raise funds for Down’s Syndrome efforts is set for Oct. 2, organized with Cabell Huntington Hospital.