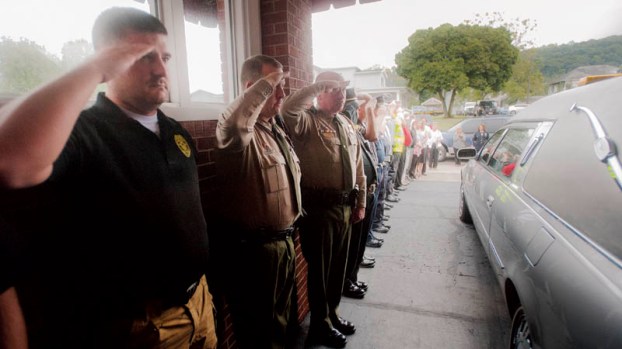 Law enforcement is at attention as the casket of Sgt. Carol Kitts is placed in an awaiting hearse following her memorial service Thursday afternoon.

Family, friends and local law enforcement gathered Thursday afternoon at Tracy Brammer-Monroe Funeral Home to mourn the loss, but also celebrate the life of Carol Kitts, a longtime employee of the Lawrence County Sheriff’s Office who died this past Friday at home.

Kitts, 61, was very well known in the community and affected the lives of countless people in a positive way.

“I’ve known Carol for the largest part of my life,” Lawrence County Sheriff Jeff Lawless said. “I started at the sheriff’s office in 1986 and she was already here. She and I became instant friends and she helped me learn the ropes in my career.”

Kitts gained experience in all aspects of the department, starting as a dispatcher before moving to dispatch supervisor, road deputy, detective and finally sergeant. Kitts even returned to the sheriff’s office on a part-time basis as a clerk following her retirement.

To this day, Kitts remains the only female sergeant the Lawrence County Sheriff’s Office has ever had.

“I remember her laugh and the joy that she brought to everyone,” Lawrence County Sheriff’s Detective Aaron Bollinger said. “She always had a calm way about her and didn’t get all excited about things.”

Bollinger said that Kitts was a detective when he started at the office.

“As an officer, I’m tired of coming to funerals of friends and co-workers who have become family,” Bollinger said. “She will be sadly missed.”

Kitts was involved in numerous community activities, including playing the flute in the Ohio University Southern Community Band and the Rock Hill Alumni Band, portraying characters in the Lawrence County Historical Society Cemetery Walk, and taking part in Pioneer Days in Wheelersburg.

“Nothing prepared us for Carol’s passing,” Lawless said. “She will never be forgotten, and I’m blessed to have known her and call her my friend.”