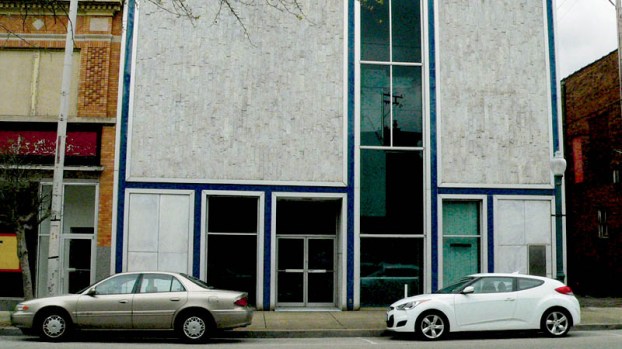 The former Citizens National Bank in downtown Ironton boasts of two safes on the first floor and an unique elevator with a view to the outside. The second story has a view of the Lawrence County Courthouse.

A solid location for a business

Or in the case of the building at 111 S. Third 3rd Street in Ironton, two safes.

The building began its life as the Citizens National Bank in the 1950s as is evident from the bank teller stations and the two large safes with safety deposit boxes towards the rear of the building.

“I’m going to say it was built in 1950,” said Ed Rambacher, who owns the building along with his brother, Gary.

“I think that’s right,” said IrontonaLive executive director Sam Heighton. “It was built around the same time as the Ro-Na Theater.”

Citizens National built a drive-thru building nearby as the demand for banking from a car increased. Then the tellers were all moved to the drive thru building and the bigger office close, probably sometime around 1990.

“They got bought out by a larger bank,” Rambacher said. “They used to be just an Ironton bank and was self-contained. Then they were told they needed a drive thru. Then they were told you don’t need this big of an office when they started doing the paperwork at the main office.”

DY Trust bought the building in 1993. The Rambachers are also certified public accountants with CA Rambacher and Company, which their father founded.

The building is a two-story structure with a total of 11,471 square feet. It has a 40-foot front and goes all the way back to the alley.

Both Rambacher and Heighton remember going to the second story of the building when it part of it was used as a dentist’s office.

“It was Dr. Waters,” Heighton said. They remember riding the elevator to get upstairs.

The elevator is unique in Ironton. It is at the front of the building and has glass so you can watch out the window as you go up.

“It’s a hydraulic system, not a cable one,” Rambacher said. “I haven’t ridden it in awhile, but that system is really easy to fix if anything is wrong with it.”

The building has had a number of tenants over the years.

When asked what kind of tenant they were looking for to rent the building, Rambacher replied “anybody who wants to make money in a good solid building in Ironton. It’s got a solid roof and it’s a solid building. It just needs to be cleaned up a little bit.”

And it has a strong electric system.

“It’s got major electric in this building,” Rambacher said. “I’m not sure why the bank had all that. But it is a strong system.”

The space upstairs is already divided for two businesses with front and back access.

Rambacher said the building is for rent or sale.