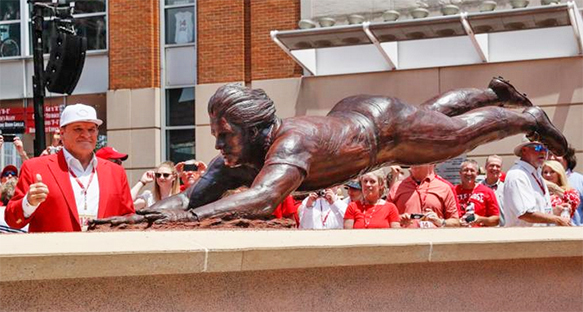 Cincinnati Reds’ all-time hit leader Pete Rose stands next to the new statue outside Great American Ball Park that was unveiled on Saturday in his honor. (Courtesy of the Cincinnati Reds.com)

CINCINNATI — Earlier last week Major League Baseball Commissioner Rob Manfred denied a request by Pete Rose to be re-instated into baseball, thus becoming eligible for the Hall of Fame.
But out of that dark cloud came a silver lining. Actually, a bronze lining as the Cincinnati Reds unveiled a statue on Saturday of Rose to stand outside Great American Ball Park with other franchise legends.
The statue is emblematic of the way Rose played the game. It is a statue of baseball’s all-time hits leader sliding headfirst into whatever base it might be.
Rose acknowledge that the statue was his greatest honor in a career that has taken him from Charlie Hustle to The Hit King and he was humbled to join other Reds’ players who have had statues sculptured in recent years such as Johnny Bench, Joe Morgan, Tony Perez, Ted Kluszewski, Joe Nuxhall, Ernie Lombardi and Frank Robinson.
“It’s a big honor to be on the same block with these guys. You’ve got the greatest catcher to ever play the game, you’ve got the greatest second baseman to ever play the game, and you’ve got the greatest Cuban to ever play the game,” said Rose.
“I thought getting in the Reds’ Hall of Fame would be big. I thought retiring my number would be the biggest thing. This is got to be the ultimate goal for any player.”
Bench, Morgan, Perez, Dave Concepcion were all on hand for the statue unveiling. Morgan missed last year’s ceremonies due to health issues when Rose was inducted into the Reds’ Hall of Fame and had his jersey retired.
Morgan walked with the help of two metal canes and received the loudest ovation among the players when he was introduced.
Thousands of fans attended the ceremonies outside the stadium despite temperatures in the 90s. Rose paid tribute to all Reds’ fans.
“You motivated me. I was born in the same city you were. I was raised on the water you were raised on. I understand the tradition of Cincinnati baseball,” said Rose.
“You motivated me to play hard. You motivated me to get base hits. And I just happened to have a bunch of teammates who felt the same way about the game as I did.”
In the pre-game ceremony, Rose re-iterated those sentiments as he rattled off the names of Cincinnati natives who went on to play professional baseball with the Reds.
“You think of guys that made the big leagues for Cincinnati — Billy Doran, Ronnie Oester, Dave Parker, Buddy Bell. What do they all have in common? They bust their (buttocks) when they play the game of baseball.
“That’s the way we were taught to play the game of baseball. I appreciate you people coming to the ball park during the 20 years I spent here and let me know about that every night. We were trying to entertain you.”
Renowned artist Tom Tsuchiya created the statue and Bench said the design of Rose sliding headfirst was the only possible way to depict one of the Reds and baseball’s greatest players.
“We all see it. We understand and recognize that’s the epitome of Pete. How many times did you see him turn a single into a double? How are you going to get a line drive statue? This is what Pete is and the way we’ll always remember him,” said Bench who is a member of Baseball’s Hall of Fame.
Bench said it was fitting that Rose join Morgan, Perez and himself with a permanent place outside the stadium.
“It’s impossible with the four of us to ever break us up,” said Bench.
Rose is either among the leaders or leads in almost all of the Reds’ all-time statistics for a single season or career.
For a single season, he has the most at bats (680), hits (230) and singles (181). For a career, Rose leads in games (2,722), at bats (10,934), runs (1,741), hits (3,358), total bases (4,645), doubles (601), walks (1,210), singles (2,490), extra base hits (868), times on base (4,654) and wins.
Rose — who retired with 4,256 career hits — not only played in more games than any other player in history (3,562), but more winning games (1,972) than any player in the history of professional sports and he stressed the importance of learning to win.
“The only reason you play sports is to win. I know there’s a lot of speculation and controversy today about participation trophies. We don’t have those in my house. Having been a professional baseball player for 24 years and a manager for five, you finally realize what it is. It’s all about winning the game,” said Rose.