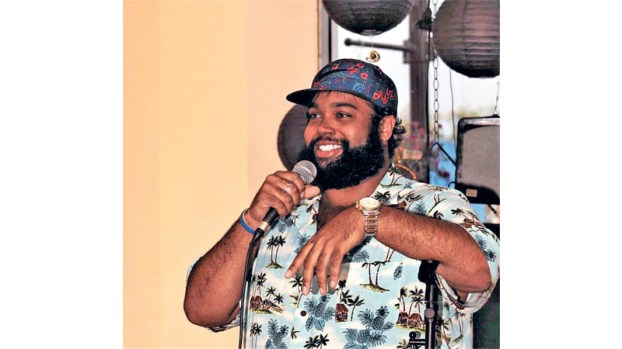 Ironton resident and local stand-up comedian Cameron Miller started hosting a Variety Show at American Legion Post 433 in Ironton every other Saturday. The next one is set for at 9:45 p.m. Saturday.

Ironton resident Cameron Miller has a new vision for Ironton of getting the youth more involved and invested in the community.

Miller started hosting variety shows about a month ago every other Saturday at the Ironton American Legion Post 433, which feature local musical acts, stand-up comedy, poetry and more.

“Basically, we, the younger generation in Ironton, are tired of having to go up the river to spend our money in other cities for a good time,” Miller said. “My vision is to bring young folks back downtown and give them something to do in a safe environment, as well as the older generation.”

Before Miller started hosting the variety shows at American Legion Post 433, however, he began by performing stand-up comedy with other comedians from around the Tri-State.

“Getting into comedy for me was quite simple. I posted on Facebook ‘who around here does open mic nights,’ and people just started tagging me left and right. Social media certainly makes networking so much easier,” Miller said. “I got added to a group, then they posted about needing people for an upcoming open mic, and boom, there I was on a set list with other comedians. It happened really fast.”

Miller added that the reason he got into stand-up comedy was to try to counteract the negatives taking place in today’s society.

“On a daily basis, I hear so much pain going on locally and in the world, so as a multi-faceted entertainer, I felt it was time to make people laugh,” he said. “I make my friends laugh, so why not try to get a crowd to laugh? I have always looked up to the greats, such as Richard Pryor, Dave Chappelle, Chris Rock and Eddie Murphy for their raw attitude. Comedy gives me a forum to not only make people laugh, but it lets me carry the tradition of talented black artists.”

Once Miller became involved in the regional stand-up comedy scene, he decided to start the variety show format in Ironton, and expand it to include more acts than just comedy.

“The legion is ran by military vets, and they are bikers, so to me, it says something when they allow hip-hop shows and comedy to happen in their bar,” he said. “Frank Murphy, the post commander at the legion, is an amazing man to work with who understands from a business and moral standpoint why we need to invest in arts and music in our own backyard.”

He added that Huntington is the model that he wants to see for Ironton.

“Huntington has a mold that I’m trying to copy. They have so much going on, that it makes me dream of better for Ironton,” he said. “The acts that I’ve brought down delivered solid performances, and that’s what I want to see out of our own residents.”

The next variety show is set for 9:45 p.m. Saturday. Miller said they usually go until about 11 p.m., but could run longer.

American Legion Post 433 is located at 310 S. Third St. between the Ro-Na Theater and Unger’s Shoes across from the Ironton City Center in downtown Ironton.