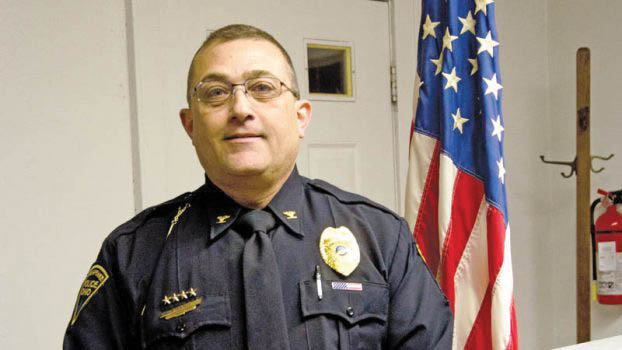 CHESAPEAKE — For the third time in the past two years, the village of Chesapeake is without a police chief.

Interim police chief Randy Lewis announced his resignation to the mayor and village council on Monday.

The special council meeting was intended to discuss the hiring of a bond clerk and unrelated personnel issues, but Lewis surprised Mayor Tommy Templeton and the four council members by submitting his two-week notice.

After initial business was conducted, Templeton announced the meeting was to go into executive session to discuss two personnel matters.

Lewis then asked that his matter not be discussed in executive session and stated he wanted it to be aired in public.

Templeton told Lewis that his matter was not in the plans for the executive session.

“Is that a yes or no,” Lewis asked the mayor of his request to air the matter publicly.

After Templeton affirmed that he could present it in the open, Lewis produced copies of 10-page document, which he presented to the mayor, council members and the media.

“I’m turning in my two-week notice,” Lewis said, telling Templeton it was was due to his “unethical conduct” as mayor.

“Thank you very much,” Templeton said.

“You’re welcome,” Lewis said as he left the room. “That’s all I have to say about this.”

Templeton then asked the council to vote to accept the resignation, which members Richard McMaster, Richard Stover, Randy Penix and Bill Duncan did, in a 4-0 vote.

Members Paul Hart and Kenny Wolfe were not in attendance.

Lewis’s resignation comes after 10 months as the village’s interim chief, taking the job to fill the vacancy after the previous chief, Lenny Abrams, resigned last summer. Abrams served several months on the job, following the removal of his predecessor, Dennis Gibson, by council and the mayor at an administrative hearing in April 2016.

Lewis outlined his grievances in his letter of resignation.

“The main reason for the submission of this two weeks notice is solely due to Tommy Templeton,” he wrote.

Some of Lewis’ points in his letter touched on issues cited by Abrams in his resignation, such as starting the mayor was requesting officers to issue more citations.

Lewis said Templeton did not appreciate “community involvement” and stated the mayor did not want officers to make felony arrests “due to the jailing fee” or to arrest juveniles, “because no money is made from it.”

Abrams had stated in his resignation letter last year that Templeton had “verbally reprimanded every member of this department for not writing enough citations to cover costs.”

Lewis said “strides” made by the department have not been appreciated.

“In March, I made the largest drug bust in Chesapeake’s history,” Lewis wrote. “Not one time has he shown any appreciation.”

Lewis, as Abrams had last year, also took issue with Templeton for acting as a peace officer.

“The mayor operates in a gray area because he thinks he is a police officer,” Lewis wrote. “Him driving a cruiser in plain clothes with a badge on is a huge liability for the Village and creates substantial risk for himself.”

Lewis conceded that Templeton was legally within his authority to make arrests and detain individuals, but said the mayor’s actions were complicating matters for the department and pointed out that Templeton has no peace officer training.

“His actions are a huge liability to the village, a huge risk to himself and a potential risk to others who may have to risk their own lives to help him if he gets into a bad situation with no training, no protective gear and no firearm,” Lewis wrote.

Following Abrams’ complaint, an opinion letter was produced from the village solicitor, which stated Templeton was legally able to act as an officer. Lewis took issue with some of the content of that letter.

“The opinion letter even goes as far to quote ORC 2905.03 Unlawful Restraint to justify his actions on page two paragraph three and concluded that he has the same power as the Sheriff. Please…” Lewis wrote.

Lewis also alleged that Templeton has used “my officers for personal favors and intimidation of others” and went on to also take issue with signs in the village not being “brought up to standards” to be seen at night, and took issue with fees charged by the village for public records.

Lewis also brought up the issue of recovery groups in the area, and stated the mayor “doesn’t like the fact” that he has supported drug awareness organizations like the Heroin Hearse and local recovery groups.

The issue of recovery organizations was the main complaint of Abrams in September, when he resigned, along with two officers.

Abrams said the mayor had “a vendetta” against Riverside Recovery Services, who operates a sober living home in Chesapeake. Templeton has openly disapproved of the home’s location on a residential street in the village.

While Lewis did not name Riverside in his letter, he was in attendance at a Picnic in the Park event the group organized on Friday in the village.

Lewis concluded his letter with a set of personal allegations about Templeton, which he said led to concerns over whether he felt the mayor was suitable to have access to the police department safe or the password for the department’s Facebook page.

In his closing, Lewis said he would no longer serve as chief, “as I will not lower my standards of ethics and integrity” and stated “for village council to retain Mayor Templeton” is an enormous liability. Best of luck finding number 4.”

After Lewis left, council and the mayor went into executive session to discuss the planned business, though Templeton said Lewis’ letter was also addressed in the meeting.

When they returned to regular session, Stover said “no action was taken” on personnel matters.

Templeton then began by addressing an issue he had with Lewis, regarding the updating of fine amounts for the village.

“Chief Lewis implemented a fine schedule, after being told by the mayor not to do so until after council’s approval,” Templeton said.

He then stated that Lewis would be removed from his police powers and he would be speaking with the village solicitor on how to proceed.

Following the adjournment of the meeting, Templeton said he was “surprised” by Lewis’ resignation, but stated he believed “he had planned this for some time.”

He said Lewis’ removal from the police duties would take place “immediately,” and that he had spoken with assistant chief Randy Thompson, who would be named interim chief, as soon as he returns from a trip to Florida.

Templeton said he had not had enough time to read the letter thoroughly in the meting and he would not respond to the Lewis’ points and allegations until he had met with the village solicitor.

He did address the issue of wanting access to the police department Facebook page, stating that many cities and villages usually “have control of their media.”

He said he had ordered the page not be used for personal posts and said this had been done by Lewis’ predecessor.

“There has to be oversight,” Templeton said.

He again said Lewis had gone forward with changing the village fine schedule, and said it was “another instance of insubordination.”

Lewis, in an interview following the meeting, said he had submitted the changes to Templeton “four times” and that the mayor had not passed them on to council members.

He said an independent investigation will be conducted on the matter.

As to the personal allegations against him that closed Lewis’ letter, Templeton said it was indicative of a “disgruntled employee” and the “end of a 30-year friendship” with Lewis.

Templeton said a more detailed response from the village will be issued and would likely be available “in several days.”

As for the numerous changes in the chief’s position since he became mayor in January 2016, Templeton stated that “only two” had resigned, and pointed out that Gibson was a holdover from a previous administration.

In other business, the council:

-hired Christy Nichols as court clerk, for $10 per hour for 39 hours per week.

– voted 4-0 to implement user fees for the deployment of personal safety vehicles.

The next meeting of Chesapeake council is set for Monday, Aug. 7 at 7 p.m.