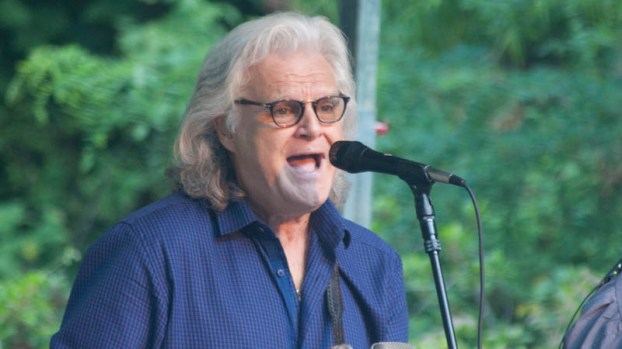 CHILLICOTHE — Bluegrass legend Ricky Skaggs and his band, Kentucky Thunder, closed out the 2017 Accurate Heating and Cooling Bluegrass series at the Sugarloaf Mountain Ampitheatre on Sunday night. Skaggs engaged the packed crowd, totaling 1,400, with stories about his youth and early career between sets of bluegrass and gospel classics, as the sun slowly set over the outdoor theater that also plays host to the Tecumseh! drama and other theatrical events.

While pausing to tune, for instance, he told stories about how impatient his father would get with his constant tuning, as well as stories of Bill Monroe’s advice to him to “whip (the mandolin) like a mule,” advice he followed and credits for his continual need to retune his instrument.

Especially poignant was the moment he took to recount the story of walking in from playing as a child while his mother, in the privacy of her bedroom, prayed for the family, including him, before launching into “I heard my mother call my name in prayer.”

Other moments, such as a young Skaggs telling Carter Stanley that he “sang just like my mom” on the Stanley Brothers classic “Rank Stranger,” were more light-hearted.

Other audience interactions, like the “hey/ho” call and response on “Black Eyed Suzie” served to engage the crowd and ramp up the energy of the show.

Tickets for the next bluegrass series are on sale now, featuring shows with Nathan Stanley, on Nov. 4, and the Grascals, on Feb. 24, at the Majestic Theatre in Chillicothe, and then Rhonda Vincent and the Rage, back at Sugarloaf Mountain, on June 17.

Former Bluegrass Boy Del McCoury and his group, the Del McCoury Band, close out next year’s season on July 8.