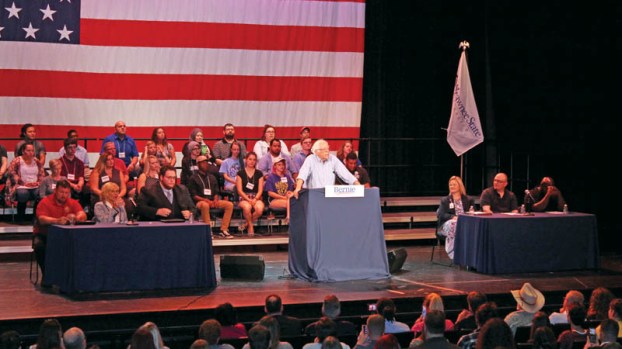 PORTSMOUTH — Vermont Senator and 2016 Democratic Presidential nominee Bernie Sanders conducted a town hall in the Vern Riffe Center of Shawnee State University Tuesday, touching on topics including healthcare, the opioid epidemic and the economy, among others.

Sanders welcomed the crowd of a few hundred, before opening the microphone up to the panel to address issues they see or face each day.

“We try to bring a dose of truth and reality of what goes on in our country. Today I’m very pleased to have a wonderful panel of people who are going to be talking about issues you may not see on TV every night…Talking about issues that may be hard to deal with,” Sanders said. “…The bottom line is that we have a nation in which a lot of people are hurting. We’re not going to be able to address that hurt and that pain unless we bring these issues out. And it’s not easy.”

One of the speakers was Summer Kirby, CEO of Compass Community Health Center, who talked about many people now having access to treatment because of Medicaid expansion.

Sanders mentioned that compass is part of a Federal Qualified Community Health Center, which helps people, even those with health insurance, get access to doctors, dentists, and other health care that they may not otherwise have.

Sanders then talked about the numerous health care bills Republicans have tried to pass over the past few months.

“…All of them have made massive cuts in Medicaid,” he said. “To the tune of some $800 billion. Some of them would have thrown 32 million people off of their health insurance they have, another one was 23 million, and another one was 22 million.”

He then moved on to touch on the opioid epidemic that is going on in southern Ohio, as well as all over the country, stating that currently as a nation, we’re losing more than 60,000 people each year to drug overdoses.

The next speaker of the panel was Lease Mowery, a counselor at Shawnee State University and an SSU alumnus. She said that she’s been in the mental health field for more than 20 years, and has seen many changes during that time.

“I’ve seen the impact a therapist can make on the quality of life for children and adults,” she said, adding that the expansion of Medicaid has tremendously helped people be able to get the help they need.

Local resident Zach Holbrook was the next speaker from the panel, who talked about how he and his wife struggle to raise a special needs daughter who is 100 percent dependent on them.

He said that he and his wife are struggling with student debt, medical bills and having lived solely by his $9 an hour income, while his wife had to leave her job to take care of their daughter full-time, and thus losing their health insurance for some time.

He said that after filing for bankruptcy and with Medicaid expansion now available, he now has a nurse who takes care of their daughter, and thanked Sanders for his fight.

“It’s not easy to do what he does. It’s not easy to get up and talk about something very, very personal. But the truth is, Zach’s story is the story of many, many people throughout this country in one form or another,” Sanders said. “This is a struggling family not making a whole lot of money with serious health care needs in the family.”

Local Portsmouth electrician union leader Dan Shirley was another speaker. He talked about the decline of unions and the decline of the middle class.

“Sadly, I’ve witnessed the decline of labor unions, which equates to the decline of working conditions, wages, benefits and the near extinction of the middle class,” he said.

He added that as a child, he and his family lived in poverty until his parents joined unions, which made it easier to provide a better life for him and his brother.

“We need to stop the attack on workers from the one percent so we all have a chance at the American dream. United we bargain, divided we beg,” Shirley said. “…The middle class built this country and the labor unions built the middle class.”

“Nearly all of the new wealth in this country is not going to the people on this panel. It’s not going to Dan’s co-workers. It’s going to the top one percent,” Sanders said. “And the top one-tenth of the one percent now owns as much wealth as the bottom 90 percent. In America today, there are 20 people who own as much wealth as the bottom half of the American people.”

Other speakers on the panel included Andrew Walker, a political science major at Shawnee State University, who talked about struggles students face finding jobs in their field and the rising cost of tuition; and Drew Carter, who read a poem about equality in America and people not understanding others’ upbringings and backgrounds.

Sanders said he believes in social and economic justice, and that people should be entitled to certain economic rights, adding that he wants to make Medicare available to all Americans as well as free tuition for students at state colleges and universities.

Other topics Sanders spoke about included the criminal justice system and reducing the amount of people in local jails and state and federal prisons, and allowing all Americans to be automatically registered to vote when they turn 18 years old, allowing more interest in issues and politics.

“At the end of the day, in my view, we have got to say to the wealthiest and most powerful people in this country, and it’s not easy to do,” Sanders said. “But we’ve got to say to the one percent and the billionaire class, that they can not have it all.”

He added that although Congress is currently in recess, he expects tax reform to be the first addressed, which would bring “massive tax breaks to the wealthiest people in this country and massive corporations.”

Sanders said that he wants to see the top one percent pay their fair share of taxes, which will even the economy for the middle class and people struggling all over the country, often working multiple jobs.

He ended the town hall addressing the crowd one final time, stating the need for fixing numerous issues, but saying that anything can be done when we come together.

“When people begin to stand up and tell the truth, and you’ve heard a lot of truth here today; not easy truth, painful truth, you’ve heard it from some of our speakers,” Sanders said. “When we have the guts to talk about what goes on in our lives, in our families’ lives, when we bring people together around rational solutions to those problems. When we do that, the truth is that in this country, there is nothing, nothing that we can not accomplish.”