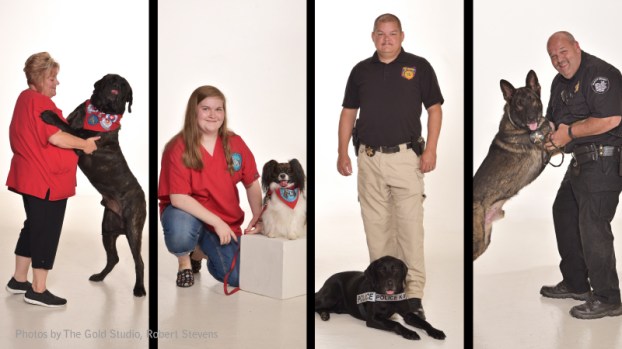 These canines are more than just companions, they have a job to do.

These canines are more than just companions, they have a job to do

Therapy dogs are those trained to provide comfort and affection to people, whether it is in schools, hospitals, nursing homes or any other situation that would require such a dog.

“I’ve always wanted to do something like this,” Sammons said of handling a therapy dog. “I work in a school kitchen, and I had seven dogs at the time, so I started looking into getting started with therapy dogs.”

Sammons works in the kitchen at Portsmouth West High School, but said she takes Midnight Moon to four nursing homes and the public library in Portsmouth, various hospitals, Portsmouth West Elementary School and even to some Portsmouth courts in some cases.

“My favorite part about having a therapy dog is going into nursing homes or a hospital, and having the nurses come out and say that that’s the first time they’ve seen someone smile all week,” Sammons said.   “You don’t realize it, but people really enjoy having that time to spend with a therapy dog, and when people know the dog, that tickles me to death.”

She also added how much she loves the kids when she takes Midnight Moon to the elementary school, as part of Therapy Dog International’s Tail Wagon Tutors program, in which children have the opportunity to read to the             therapy dog.

Before Sammons started with Midnight Moon as a therapy dog, she previously handled two other therapy dogs, Little Bear and Jetta, who are now retired, although they still live with Sammons.

Midnight Moon has many distinctions and awards since becoming a therapy dog and is currently working to receive his Therapy Dog International Gold for 500 visits, and Sammons also sent off for Midnight Moon’s Novice Trick Dog Award, but is still waiting to hear back on that.

Therapy Dogs International is a non-profit volunteer organization, founded in 1976 in New Jersey, dedicated to the regulation, testing and registration of therapy dogs and their handlers for the purpose of visiting various places where therapy dogs are needed. The organization registers all kinds of dogs, which are at least 1-year-old and have passed the TDI temperament evaluation for suitability.

Currently, Sammons and her family have six dogs, including Midnight Moon, Bug, a 5-year-old Papillon who her daughter handles as a therapy dog, retired therapy dogs Little Bear and Jetta, and two dogs who are just pets.

Sammons and Midnight Moon have a public session as well, where the public is invited to interact with him from 2-4 p.m. on the first and third Saturday of each month at the Portsmouth Public Library.

Like her mother Stacey Sammons, Kayla Sammons, 17, has been involved with Therapy Dogs International for the past five years, handling Bug, a 6-year-old Papillon.

Kayla attends Portsmouth West High School, and attends the same places as her mom with their therapy dogs, except for schools due to her being in school herself.

“I really like when you go somewhere with the dogs, and people tell you how happy they are,” she said. “Just to be able to see their faces when they see the dogs makes it all worth it.”

At the time her mom was getting involved with Therapy Dogs International, she said she also wanted to be a part of handling a therapy dog.

“We already had the dogs, and then we trained them to be able to pass the test to become therapy dogs,” she said of Bug and her mom’s therapy dog, Midnight Moon. “In order to be able to take the test, the dogs must be at least a year old.”

Other qualifications of the TDI test include the dogs having a sound temperament through a temperament evaluation and an evaluation of the dogs’ behavior around people who use various types of equipment, including wheelchairs and crutches.

Because Sammons isn’t able to go on as many visits with Bug as her mom with Midnight Moon, Bug currently only has her Therapy Dog Active Award for 50 visits, but is working on moving up.

Kayla and Bug are also at the Portsmouth Public Library with Kayla’s mom and Midnight Moon for the public to have a chance to visit with the dogs from 2-4 p.m. on the first and third Saturdays of each month.

Dolan is pretty lucky for a former shelter dog.

The black lab was dropped off at the Cincinnati Lab Rescue in early 2016. While it could have meant sitting in a kennel waiting for somebody to take a liking to him, the rescue employees saw that the then-two year old dog had a certain quality to him.

So they contacted the Columbus Division of Fire to see if Dolan had what it takes to be an arson dog. It turns out he did.

After eight weeks of training last summer, Dolan learned how to sniff out the nine different types of fluids used to start arson fires and other tasks that make for an arson-investigating dog.

After an official graduation ceremony in April 2016, Dolan was assigned to Jeffery Heft, an Ohio State Fire Marshal arson investigator and volunteer firefighter with the Madison-Jefferson Fire Department in Oak Hill.

The duo became the first K-9 arson team based in southern Ohio.

Heft said that Dolan has no qualms about walking in front of the handler, which is important for a dog doing an investigation.

“They want one that will get out there, one that doesn’t cower behind his handler,” Heft said. “Plus, they do an evaluation and if the dog doesn’t work out, they can have the option to take him back to the shelter.”

There are a lot of things arson dogs have to be unfazed by, like the sounds of a running fire engine.

“The trainers will put a toy under a fire truck and see if the dog will go and get it without hesitation,” Heft said. They also have to be willing to go into a burned out building and sniff around looking for the common types of accelerants used in arsons such as gasoline, diesel fuel, lamp oil, kerosene, lighter fluid, charcoal fluid, paint thinner, camping fuel and distillate based stain removers.

Heft said Dolan has investigated a number of possible arson scenes in the past year.

“And he’s done very well,” he said. “His main purpose is to assist us. A dog can pinpoint an area where a possible accelerant was used. Depending on burn patterns, an investigator might say it began in a certain room, but with the dog, you can pinpoint where the fire started.”

Dolan was taught that, if he smells a chemical accelerant, to sit down in front of the spot, as his way of alerting his handler.

Anything the dog alerts on is sent to a state lab for testing.

While most dogs just eat of a bowl of food, Dolan has to work for his. Whenever it is mealtime, Heft runs Dolan through his paces of looking for accelerants. When he finds it, Heft gives him food as a reward.

“So everyday, he has to work that’s how he gets fed,” Heft said. “He is fed out of my hand. It keeps him sharp and pinpointed on his job.”

And since they could get called out to investigate a fire scene, Dolan doesn’t have a regular feeding schedule so he is ready to work at any time.

“He never goes without eating for hours at a time, he just doesn’t have a set schedule,” Heft said. “He needs to be ready to go. But he definitely is not underfed, that’s for sure.”

Before Dolan came to southeastern Ohio, fire investigators had to call for an arson dog from Columbus or northern Ohio, which meant a couple hours of waiting.

Now, there is an arson dog in southwest Ohio, too.

Heft said that being a dog handler is a life-changing event.

“You have to make arrangements for them all the time, like if you go on vacation,” he said. “I haven’t even had him stay with another handler, though. He just goes with us and we continue training, even when we’re camping. Even on vacation, we have to work on our training.”

Heft said he and Dolan are always together.

“It’s like we are strapped together sometimes. It’s not like I can just call a neighbor to feed him if I am out of town,” he said. “He has to be worked. But on his off time, except for having to work for 10 minutes or so to be fed, he’s like any other dog. He loves to play fetch and run with my other two dogs. He’s still definitely a pup. He’s a go getter.”

Lawrence County Sheriff’s K-9 Kilo, and his handler, sheriff’s deputy Scott Wilson, spend most of their time patrolling the county’s schools during the school year.

Kilo is a German Shepherd just over a year old, who took over for Wilson’s previous K-9, Hemi, a 13-year-old Belgian Malinois who retired earlier this year after 10 years of service.

Wilson said that he and Kilo, previously Hemi, don’t start going around the schools to check lockers until middle school in the sixth grade. However, he uses his time with Kilo at the elementary schools as kind of a show and tell, often with a story book about an officer and his K-9 before coming out with Kilo to bring the story to life.

The reading program was started about four years ago with a third grade class at Burlington Elementary, and has grown to include South Point Elementary, Dawson-Bryant Elementary and others.

“My favorite part about being the school resource officer is being able to help the kids of the county when needed, and building rapport with the students,” Wilson said. “Over the past years of being in the schools, I believe I’ve made an impact by just being present within the buildings.”

Wilson said that marijuana is the only drug that has been found in the schools since he started as the school officer, adding that he’s pleased with that since the opioid epidemic is so prevalent in the area.

When not in the schools, Wilson and Kilo assist with keeping drugs off of the streets during traffic stops or whenever needed.

Although Hemi is now retired, he still lives with Wilson and Kilo, though Wilson said the two dogs don’t get along that well, but he is hoping that will improve.

“Overall, being a K-9 handler is a great opportunity. I was very excited when I was appointed to the position,” Wilson said. “I want to try to keep the drugs out of the schools and off the streets. This is my second K-9, and the bond you build with the dogs is amazing.”