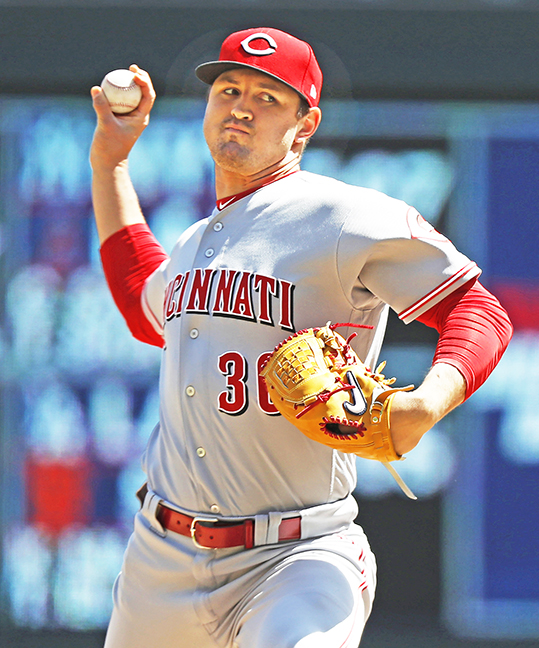 Cincinnati Reds’ Tyler Mahle (30) throws against the Minnesota Twins on Sunday at Target Field in Minneapolis, Minn. Mahle got the victory as the Reds won 8-2. (Richard Tsong-Taatarii/Minneapolis Star Tribune/TNS)

MINNEAPOLIS (AP) — If Tyler Mahle continues to pitch the way he has in his past two starts, the Cincinnati Reds shouldn’t need another month to win their next series.
Mahle pitched into the seventh inning in another impressive start, Jose Peraza had three hits and Adam Duvall homered, leading the Reds to their first series victory of the season with an 8-2 victory over the Minnesota Twins on Sunday.
Mahle (2-3) cruised through the Twins’ lineup in his second straight solid outing. In his most recent start, he struck out 11 and took a no-hitter into the seventh inning against Atlanta. On Sunday, Mahle gave up one run in 6 1/3 innings, allowing four hits and two walks while striking out seven.
“He’s really stretching it out a little bit each time, throwing great stuff, really a challenge for the hitters,” Reds interim manager Jim Riggleman said. “Big league hitters don’t miss too many times in the strike zone, and he’s had a couple games in a row now where he’s gotten a lot of swings and misses.”
Peraza had eight hits during the weekend series as the Reds took two of three from the Twins. Cincinnati won for the fourth time in seven games after starting the season 3-18. Meanwhile, Minnesota lost for the ninth time in 10 games.
“You look at our record and say, ‘OK, you can’t win seven ballgames in one day,”’ Reds outfielder Scott Schebler said. “You really have to take it one game at a time and then eventually look up and hopefully be in a better spot than we are right now.”
Twins starter Jose Berrios (2-3) struggled with his command and the Reds made him pay. The 23-year-old right-hander walked three and allowed five hits in three innings, his shortest start of the season. He also didn’t strike out a batter for the first time in 15 starts. Of his 60 pitches on the day, just 32 were strikes.
“Everything works off the fastball, and I couldn’t control it today,” said Berrios, who has given up at least one run in each of his last seven innings. “In the bullpen, I was commanding all my pitches. When I went out there, it didn’t work out.”
The Reds did most of their damage early while Mahle was silencing the Twins’ bats. Two-out RBI doubles by Eugenio Suarez in the first and Jesse Winker in the second put the Reds up 2-0. The first three batters reached in the third as Cincinnati tacked on two more runs against Berrios before adding three more against reliever Taylor Rogers in the fourth to make it 7-0.
The Twins got on the board in the sixth when Joe Mauer’s single drove in Jason Castro, who had led off the inning with a double. But Duvall got that run back with a solo shot in the seventh off reliever Tyler Duffey.
Castro’s RBI double in the ninth capped the scoring.
PUTTING IT IN PLAY
The Reds kept their early rallies going by beating out five potential double-play balls in the first four innings. None of the balls seemed to be sure double plays, but in this era of “three true outcomes” (home runs, strikeouts and walks), Cincinnati demonstrated how to put runs on the board without swinging for the fences.
“In today’s game, the strikeout is not frowned upon as much as it used to be,” Riggleman said. “But by putting it in play there and beating out those balls that were potential double plays, we got a couple of runs out of that and extended rallies.
The third inning was a perfect example. The first three batters reached to load the bases. Then, Schebler hit a ground ball to first base that Mauer fielded and threw to second for a force out, though Schebler beat the relay and a run scored. Duvall then hit a ball to shortstop for another force at second, but he beat the return throw to first and another run scored.
“We really seem to find ways to score runs without the home run, which is a quality that some teams don’t do that very well,” Schebler said. “This is the kind of offense we know we have, and it’s just a matter of time before it kind of showed.”
INTERLEAGUE BREAKTHROUGH
The victory not only gave the Reds their first series victory, it was the first time they’d won an interleague series of at least three games since sweeping the Astros in September 2013.
TRAINER’S ROOM
Twins: 3B Miguel Sano (hamstring) was out of the starting lineup for the second straight day. Twins manager Paul Molitor said he was available to pinch hit if needed. Sano’s hamstring flared up Friday night, when the Twins and Reds played a four-hour game with temperatures that dipped into the 40s.
UP NEXT
Reds: LHP Brandon Finnegan (0-2, 8.03) will face the Brewers in Cincinnati on Monday in the opener of a three-game series.
Twins: RHP Lance Lynn (0-2, 7.71) is still in search of his first AL victory. He’ll face the Blue Jays on Monday as the Twins wrap up their homestand with three games against Toronto.